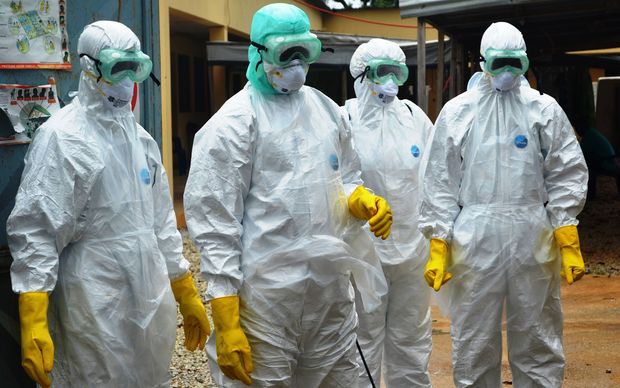 Health workers wearing protective suits prepare to carry the body of a victim of Ebola in Conakry, Guinea. Photo: AFP

Some of the bodies - of health workers, local officials and journalists - were found in a septic tank in a village school near the city of Nzerekore, the BBC reports.

"As I speak, seven corpses of the nine people who were reported missing have been discovered. This act speaks loudly of cruelty of the most intolerable kind and is most unjustified, no matter the circumstance."

The BBC reports that all nine bodies have now been found - seven bodies in the septic tank and two more in the bush.

The team disappeared after being pelted with stones by residents when they arrived in the village of Wome in southern Guinea, where the Ebola outbreak was first recorded.

Six people have been arrested and the village is reported to be deserted.

The motive for the killings has not been confirmed but the BBC's Makeme Bamba said many villagers have accused health workers of spreading the disease.

The discovery of the bodies comes on the same day as the United Nations unveiled plans for a special mission to combat the worst Ebola epidemic ever.

The UN Security Council also adopted a resolution on Friday declaring the current outbreak a threat to world peace and security, and calling on countries to provide urgent aid.

The death toll from the epidemic, which is affecting the West African countries of Guinea, Sierra Leone and Liberia, has hit 2,630. The outbreak began in March.