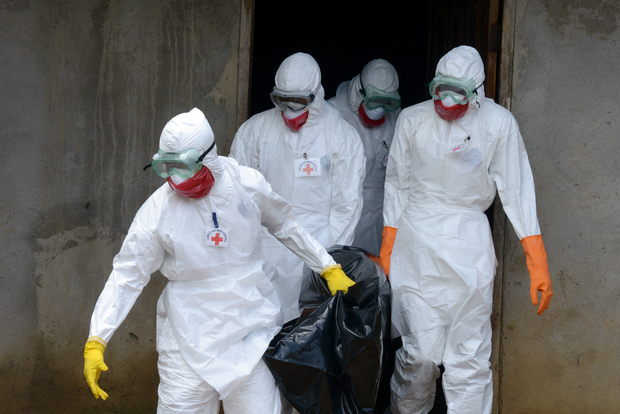 Medical workers of the Liberian Red Cross carry the body of a victim of the Ebola virus in a bag on 4 September. Photo: AFP

The charity said a lockdown would force people underground, destroy trust between doctors and the public and ultimately help spread the disease, the BBC reports.

About 2100 people in Sierra Leone, Liberia and Guinea have died so far.

Medecins Sans Frontieres (MSF), whose staff are helping to tackle the outbreak, said in a statement that quarantines and lockdowns could lead to the concealment of potential cases and end up spreading the disease further.

The World Health Organisation says blood from people who have recovered from the Ebola virus should be used to treat other patients.

The BBC reports that experts from the WHO made the announcement at a meeting in Geneva on methods of tackling the outbreak.

"They have agreed that the quickest and safest fix for now is using so-called convalescent plasma therapy - taking blood from people who have recovered from the virus. The idea is that the antibodies in the blood can help those still fighting it," BBC reporter Tulip Mazumdar said.

"International efforts must now be invested to help infected countries carry out the blood transfusions safely. The method has been used in a very small scale in past outbreaks and some people have recovered but there's still no clinical evidence of its effectiveness."

The BBC also reports that Sierra Leone - one of the countries worst hit by the outbreak - has announced a four-day lockdown to try to tackle the disease.

From 18 to 21 September people will not be allowed to leave their homes, a senior official said.

The aim of the move is to allow health workers to isolate new cases to prevent the disease from spreading further.

The outbreak has killed about 2,100 people in Sierra Leone, Liberia, Guinea and Nigeria in recent months.