Ukraine's president Petro Poroshenko held a security council meeting on Thursday over the "sharp aggravation of the situation". Russia has denied the claims.

Earlier, rebels opened a new front in the south by seizing the coastal town of Novoazovsk, the BBC reports. 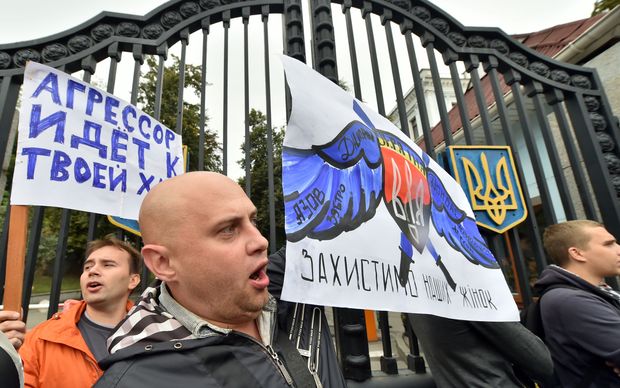 Protestors hold placards "Aggressor comes to your house" and "Save our women" during a rally in front of the Ukrainian Defence Ministry in Kiev. Photo: AFP

At least 2,119 people have been killed in four months of fighting.

Amid condemnation from Western powers, the United Nations Security Council has held an emergency meeting in New York today to discuss the crisis.

"Russia has to stop lying and stop fuelling this conflict," the US ambassador to the UN, Samantha Power, told the council.

Britain's ambassador Sir Mark Lyall Grant said Russia was guilty of "a clear violation of sovereign Ukrainian territory", adding that the conflict would "no longer exist" without Russia's direct support for separatists.

Meanwhile Russia's ambassador to the UN, Vitaly Churkin, said the crisis was a "direct consequence of the reckless policy of Kiev, which is conducting a war against its own people"

Nato Brigadier General Niko Tak said there had been a "significant escalation in the level and sophistication of Russia's military interference in Ukraine" over the past two weeks.

More than 1,000 Russian troops are operating inside Ukraine, both supporting the separatists and fighting on their side, according to Nato.

But Russia's ambassador to the EU, Vladimir Chizhov, said Nato had "never produced a single piece of evidence" for its accusations. He said the only Russian soldiers on Ukrainian soil were 10 paratroopers captured earlier this week.

Government forces had made significant advances against the separatists in recent weeks, but these gains seem in doubt with rebels now operating in two distinct areas of Donetsk region.