Western countries have angrily condemned the unauthorised entry of more than 100 Russian aid lorries into rebel-held eastern Ukraine, which Ukraine has said was effectively an invasion. 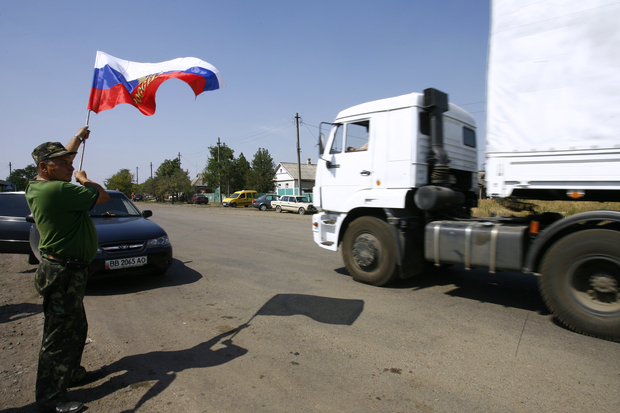 Moscow said the convoy only carried aid such as generators, food and water, but Ukraine said it was being used to suport pro-Russian rebels in the east.

As the first of the white lorries crossed the border into Ukraine, Western countries unleashed a "tide of condemnation", the BBC's Tom Esslemont said.

"They fear Moscow will use the convoy as a pretext to launch a full-scale invasion."

The EU and the US have called for the lorries to be withdrawn, saying their presence violated Ukraine's sovereignty, and Nato said the move would fuel the crisis.

But Russia said the Ukrainian government had taken too long to give the green light to allow the convoy in.

The first lorries have now reached the besieged rebel-held city of Luhansk and the UN has held an emergency meeting to discuss the convoy's entry, which Ukraine has described as an "invasion".

Meanwhile, Lithuania - a fierce critic of Russia's actions in Ukraine - has said its honorary consul in Luhansk has been murdered "by terrorists", a term routinely used by Ukraine for pro-Russian separatists.