About 90 Russian trucks carrying aid for civilians in rebel-held eastern Ukraine have crossed the border into Ukraine today.

The convoy had been held up at the border for more than a week. 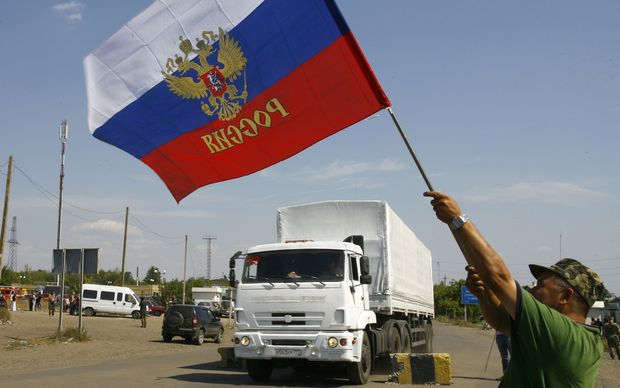 A Russian national flag is waved as trucks cross the Ukrainian border at the Izvarino custom control checkpoint. Photo: AFP

The Ukraine government fears the aid may help the rebels it is fighting and wanted the Red Cross to distribute it.

The first sign that the convoy was going to cross the border was when the Russian foreign ministry put out a statement complaining of what it called endless delays concocted by Kiev that were preventing the trucks getting to the besieged city of Luhansk.

Soon afterwards, the first of the vehicles drove through the Ukraine border post and into territory held by pro-Russian gunmen, the BBC reports.

The International Committee of the Red Cross, which was supposed to be accompanying the trucks, immediately put out a statement saying it was not part of the convoy in any way.

The trucks are driving towards Luhansk into one of the most hotly contested areas in war-torn eastern Ukraine.