Hundreds of Hong Kong protesters have rallied outside the British Consulate demanding that the UK press China to maintain freedoms agreed when the city was handed over in 1997. 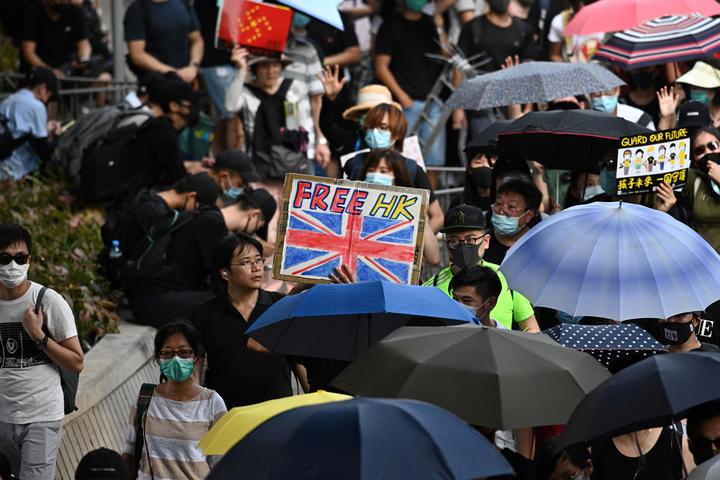 They sang God Save the Queen, shouted "One country two systems is dead", and waved Union Jack flags.

Thousands are also defying a police ban and marching through the city. Their demands include full democracy.

China has warned other countries not to interfere, saying the situation in Hong Kong is purely its own internal affair.

Britain has said it has a legal responsibility to ensure China abides by the "one country two systems" principle agreed before the handover.

The protesters won a major concession earlier this month when a proposed bill allowing extradition to mainland China, which sparked the latest unrest, was scrapped.

But this has failed to end the unrest as protesters continue to call for democracy and an investigation into allegations of police abuses.

Why was there a protest at the UK consulate?

While Hong Kong is part of China, the "one country two systems" arrangement gives it a high degree of autonomy and protects rights such as freedom of assembly and freedom of speech.

But the protesters outside the British Consulate shouted "One country, two systems is dead" and "Free Hong Kong".

"It was promised that Hong Kong people would enjoy basic human rights and such protection," one demonstrator told the BBC.

"We believe that the UK government has the legal rights and moral obligation to protect Hong Kong people," he added.

China insists it is committed to the arrangement. 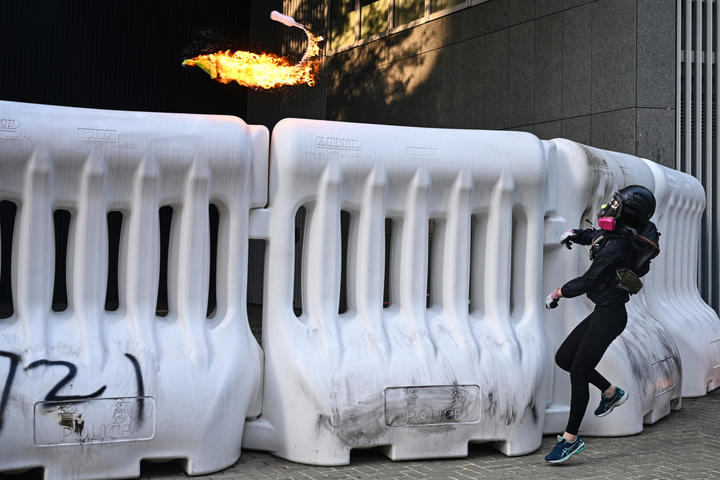 A protester throws a molotov cocktail over a barricade outside the government headquarters in Hong Kong on September 15, 2019. Photo: AFP

Some campaigners also want the UK to change the status of its British National (Overseas) passport, issued to Hong Kong residents before the 1997 handover.

It allows a holder to visit the UK for six months but does not include an automatic right to live or work there.

In 2017 there were about 60,000 current BN(O) passport holders in Hong Kong, according to the South China Morning Post newspaper. But anyone holding an expired passport can renew it, it said.

Thousands of people are marching in defiance of a police ban.

For the second week running, some carried the US Stars and Stripes flag and called for President Donald Trump to "liberate" Hong Kong.

Earlier this month, US Secretary of Defense Mark Esper said China should show "restraint". Instead of a crackdown, he urged Chinese authorities to "to sit down and talk with the protesters and resolve the differences".