At the 65th minute I knew we were done. I left the office to pace the hallway.

I was joined by one of my French colleagues and he put his arm around my shoulder, shrugged his shoulders in that Gaelic way and said: "Je suis désolé (I am sorry)".

The next day he returned to our office in a corner of Paris wearing the French flag. His sorrow had clearly passed. 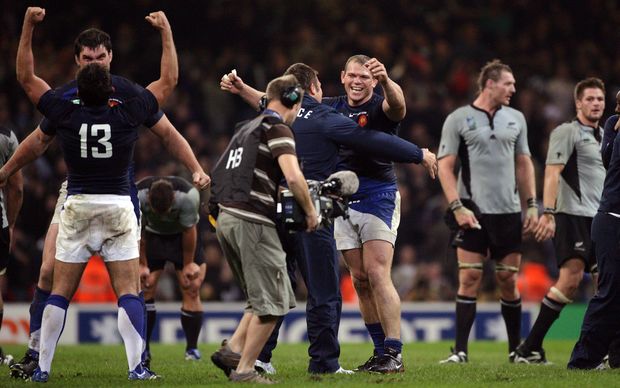 France celebrate as the All Blacks look on after the World Cup loss in 2007 in Cardiff Photo: Photosport

The 2007 Rugby World Cup provided a surprise or two, none more so than the much-lamented All Blacks loss to France in the Cardiff quarter-final. This Sunday the two teams meet again at the same Cup stage and venue.

Sometimes the best way to deal with all possible outcomes is to confront old demons. So here we go:

Yes, Dan Carter is crying, Richie McCaw is crying. The man cut from granite leaks. They are so young. The haircuts are bad and they're wearing those awful black and grey uniforms. We look desperate and short of ideas. That pass was forward.

In The Guardian, William Fotheringham wrote about the "bewildered Kiwi fans" wandering Cardiff's streets trying to "make sense of it all"

"What France did create was a virtually impenetrable wall of dark blue shirts whenever New Zealand went forward.

"Their tackle count nudged 200 for the evening, with Thierry Dusautoir accounting for some 30 of those. Two and three-man tackles muzzled New Zealand's ability to offload the ball rapidly." 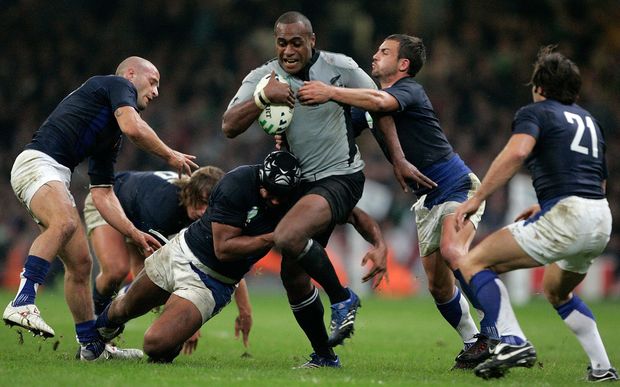 All Blacks wing Sitiveni Sivivatu is swamped by the desperate French defence in 2007 Photo: Photosport

The opening line of Steve James' piece in the Daily Telegraph at the time was: 'Four more years, New Zealand'. Under the headline 'End of the world for the All Blacks', James wrote: "They said it could not happen again. They said that New Zealand could not botch another World Cup. They said that there would not be a repeat of 1999 at Twickenham when France, from nowhere, humbled the seemingly invincible All Blacks. Well, revise your opinions. New Zealand have yet another long wait."

James described the match as "jaw-droppingly physical at times, error-strewn at others, but always compelling and utterly thrilling. It was knockout rugby at its most fraught and fascinating.

"Carter, never himself throughout, limped off. What a time to lose your totem. And replacement Nick Evans did not last long either. When replacement Sebastien Chabal stymied an All Black attack by turning the ball over you'd swear France had won the entire competition, such was the reaction." 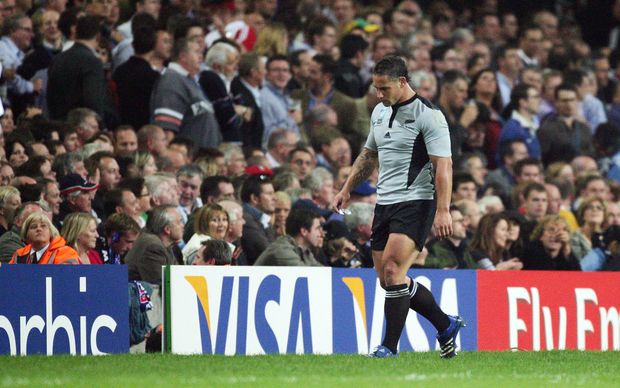 Luke McAlister heads to the sideline after being yellow-carded in the All Blacks loss to France at the 2007 World Cup in Cardiff Photo: Photosport

All Blacks hooker Anton Oliver, post-match and facing retirement, told Fairfax the dressing room was like "no man's land" in World War I.

"There's a sort of desolate decay and the smell of death... I didn't want to take my jersey off. No one wants to finish their career like this. The country and the team had such high hopes."

It just goes to show that what we really need is a healthy dose, excuse the French cliché, of joie de vivre about it all. 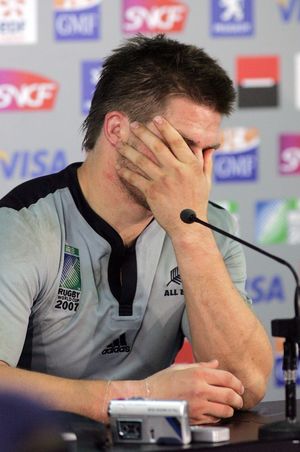