John Daniell writes about growing up among spies and why he decided now was the time to get to the bottom of an SIS secret and make the findings public in new podcast The Service. 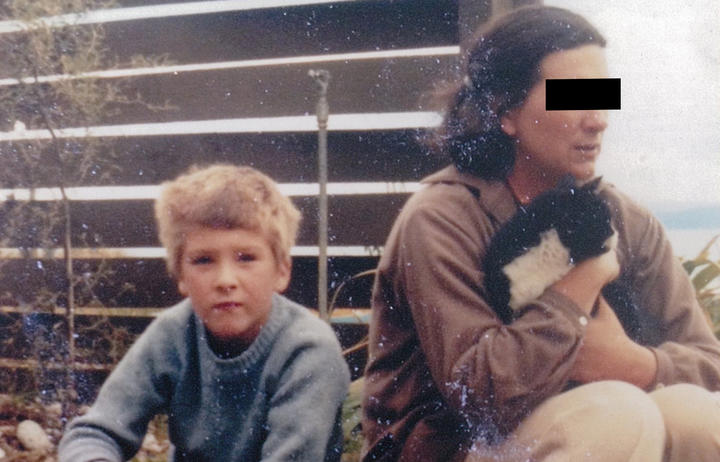 When my mother first told me she had been a spy, I didn't believe her. At the time, Mum was working in an interior decoration shop and helping out at a charity for disabled adults. I was only 10 but had already seen a couple of James Bond films, so I knew what spies did - and they weren't doing it in suburban Wellington.

As it turned out, they were. Not battling super-villains in mountain lairs, but serious spy stuff all the same. Mum worked as a research officer for the New Zealand Security Intelligence Service on what was known as 'the Russia desk' in the late 1960s and early 1970s. She left that job to have me, but it wasn't just her former employers - MI6, the KGB and the rest were all doing their thing here too. By the time I was 14, in 1986, we had a guy from MI6 - the British secret intelligence service - staying in the spare bedroom, while his team was working on joint operations with their New Zealand counterparts. At least one of those operations targeted a foreign embassy in search of a prize that might tip the balance of power in the Cold War.

At the time, I saw only a tiny part of this: my step-father, who was an active NZSIS intelligence officer, worked on these operations, and Mum's background meant our house was considered safe. I was sworn to secrecy but filed away enough of what I saw and heard to be able to ask questions decades down the track, when it felt like enough time had passed to be able to talk openly about what really happened.

But those secrets cast a long shadow. 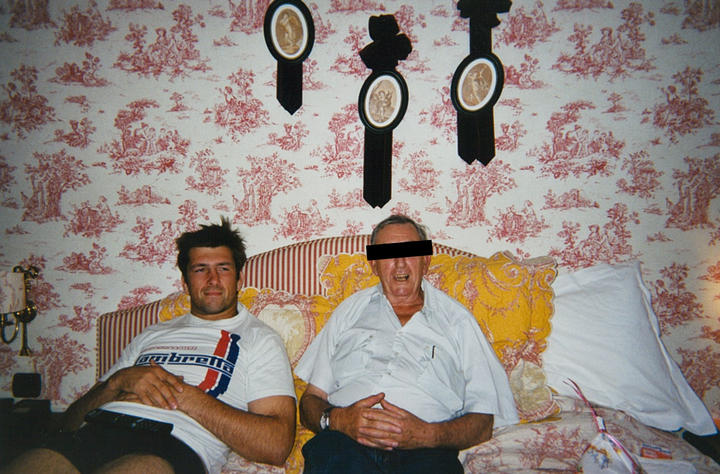 John and his step-father, who used the pseudonym Jim Stewart Photo: Supplied

My step-father - who we're calling Jim Stewart - told me about the embassy job 20-odd years ago, before he died in 2005. Today, even after all this time, it isn't something the SIS want to talk about. On the record they would neither confirm nor deny it had ever happened. Off the record? Off the record, things get murky.

Editorial: Why we are revealing SIS secrets

Day one, we interviewed my mother. Mum - or "M" as she's asked to be called, despite looking nothing like Judi Dench - will be 80 next year but agreed to talk to us, guardedly. Mum - M - often talks about her memory as being "moth-eaten" but she can still recall the number plate of the car used by Yuri Drozhzin, the KGB rezident at the Soviet Embassy during her time (DC413, apparently: easily identifiable because, while they had a cover - typically something along the lines of "second cultural attaché" - spies attached to embassies operated under diplomatic immunity unless they were caught doing something so egregious that they were expelled). Exactly what else she can remember isn't entirely clear, but she's told me she tried to forget many of the things she knew about. Very little of what we eventually discovered came from her.

When can you tell a secret? How do you know if it's lost the power to hurt those it is designed to protect? And when loyalties get mixed up, to whom do you owe the ultimate responsibility?

We've tried to use our judgement. We were given names, told about events and acquired documents that we haven't used in this series because doing so would have exposed those concerned without adding anything to what we were trying to find out. The story we ended up telling is bigger than my family, but it feels slippery for me to insist too much on the public's right to know - my priority was satisfying my own curiosity, and - as far as possible - keeping my conscience clean. What I really wanted to know was: how significant were these affairs of state that played out within a tight circle of people, some of whom I knew and loved?

We asked a lot of people a lot of questions - and a whole lot of unexpected revelations fell out of that process - but all the way through I had the uncomfortable feeling of betraying a confidence. Still, the alternative was simply shutting up and letting the opportunity to find out more slide away with time. Already, five of the seven people we identified as definitely knowing about the operation in question had died.

I hadn't realised how much I didn't know. Slivers of information came to light about my step-father's role in events that shaped New Zealand history - from the Sutch case to the Rainbow Warrior affair, oblique references to a bunch of other operations that for one reason or another are unlikely to be fully revealed in my lifetime; his chaperoning of KGB colonel turned MI6 agent Oleg Gordievsky - "The Spy Who Saved the World", according to at least one documentary - and the time Gordievsky, under sentence of death from the KGB, took my parents out to a Japanese restaurant in Wellington. It was Mum's first Japanese meal. 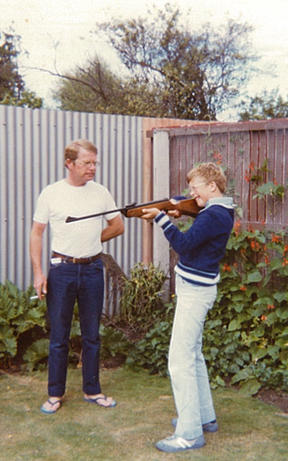 All the time I had to question my own memories, the source material for the whole story. We approached the former head of the SIS Russia desk, Jamie Mercer (another pseudonym) for an interview through a third party. I first met him with Mum when I was 10, just a few days after she'd told me about her past with the SIS, then again a couple of times when I was still a kid. (I had lemon chicken at the Jade Garden with him, my first Chinese meal.) But - understandably - he didn't remember me, which made me feel uneasy: what if this was all somehow recovered memory? He declined to talk.

A few weeks ago I found a photo of him teaching me how to shoot a slug gun in his back yard in late January 1982. There's another photo of him on Aro Street in Wellington, holding onto an umbrella with Dmitri Razgovorov of the KGB after the Russian had been intercepted meeting with Dr Bill Sutch in Aro Valley in September 1974. The two intelligence officers walked up and down in the rain for a couple of hours as the New Zealander tried to lure the Russian into defecting. I hadn't seen the photo or known about any of that until I started asking.

Jamie Mercer died in late 2019. He wasn't the only one to refuse to talk to us - far from it. Of those who did speak to us, many - most - kept a filter on. Former prime ministers Sir Geoffrey Palmer and Helen Clark both gave us crucial insights and information, but both would only go so far with what they were prepared to reveal.

At the end of the interview with Clark there was a slightly awkward moment while she referred to an email from an ex-SIS family friend who'd also declined to talk to us. She scrolled through, rattling off my CV and family background. She seemed to glide past certain bits that weren't for my ears.

One way or another, it was clear that our investigation had attracted some attention. And paranoia - or was it? - seeped in: an office break-in looked like a straightforward smash and grab, but afterwards I couldn't find the notes from my initial conversation with the SIS. Houses get burgled - we were in the middle of a renovation and the place was such a bombsite it took me a while to realise we'd been turned over. Probably I'm just disorganised. But for a while, I slept lightly. As a freelancer, it was nice to have the backing of the state broadcaster.

There were moments when I was glad to have started asking some of these awkward questions. I was moved to hear Kit Bennetts, another former SIS officer, talk about some of the jobs he did with Jim, how good my step-father was at what he did, and why the personal risks involved might have deserved a little recognition from the government that sent him out to do those jobs. But at least one interview - in the final episode - felt like a gut punch, a reversal that threw all our painstakingly crafted understanding of what happened back up in the air.

As Kit Bennetts puts it, the world of espionage is a wilderness of mirrors: reality is refracted, distorted, almost unknowable. Which version of what you see is the truth?

If there is a public interest in this story, I hope it doesn't get bogged down in the legal niceties around the Vienna Convention and the Cold War activities of the SIS. As Helen Clark told us, "Context is everything." Understanding more about the intersection between spycraft and statecraft, how foreign powers try to manipulate our political system - that's worth knowing about.

Secrecy is embedded in the system, tied up with loyalty to the institutions that run our intelligence networks. I could still see that with Mum - M - worrying about how much she could say about events that occurred decades ago in a Cold War that has been over for 30 years. But while some level of secrecy is necessary, when it becomes a comfort blanket for those institutions, the public end up with a big blind spot right where we need to understand more about how this shadow world operates and - crucially - why.