Today we launch a podcast, The Service, that reveals SIS secrets from the Cold War. The series' executive producers explain why they decided classified information should be divulged. 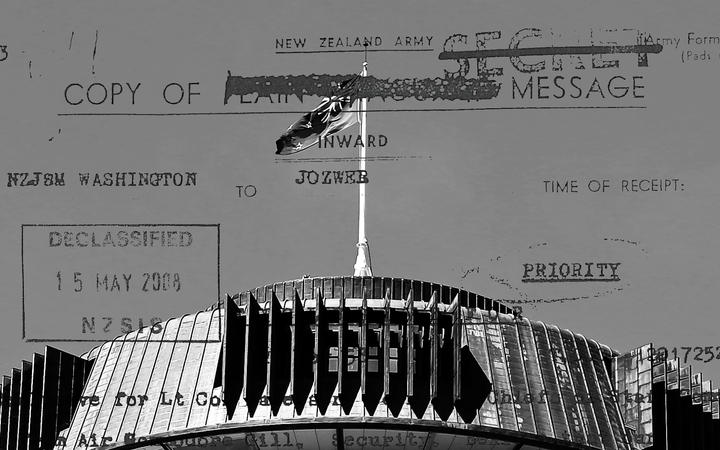 "Who watches the watchers?" It's a cliché but also an important question, and one we've asked ourselves many times as we worked on The Service, a new five-part podcast series that delves into SIS secrets during the Cold War.

It was the question that hung in the air during our first conversations with writer and documentary maker John Daniell and RNZ investigative reporter Guyon Espiner, when they told us what they wanted to do; confirm a story John had been told about the SIS and MI6 raiding the Czechoslovakian Embassy in Wellington and reveal what they uncovered.

Of course, it was only one of many questions that flew around during the year it took to make The Service. Should we ever reveal intelligence secrets? And if so, what passage of time should pass between the event and our reporting? Should we ever interview former spies, given they are legally required to keep what they know secret?

But in the end those questions - and the many others we asked ourselves - all came full circle and landed us back at that first one: who watches the watchers? If SIS operations remain buried forever, there is no way of knowing what the agency does in New Zealand's name. The public must be able to evaluate the SIS's actions once a reasonable passage of time has passed and any associated threats recede, otherwise we risk making a public agency beyond scrutiny. This only becomes more imperative when there are controversial decisions involved, such the SIS's 1986 call to breach the Vienna Convention on Diplomatic Relations by breaking into the Czech embassy.

First person: John Daniell on growing up around spies

During the investigation, we found this view reflected by former prime ministers, senior civil servants and SIS officers. Former prime minister Sir Geoffrey Palmer told us, "I think the protective security requirements should be reviewed. So they actually follow what they say about declassification, the record should become available to historians and others after a lapse of time. I mean, otherwise, how are we going to know what we were doing and why?"

Still, we are not revealing all we have learned over the past year. Telling some of the stories Guyon and John uncovered would expose the people involved without greatly adding to the historical record or the conversation on transparency, which we hope this podcast series will spark.

It is a conversation we would like to see the SIS take part in. John and Guyon have approached the agency many times over the past year. We felt the SIS should have a chance to tell its side of the story - and to warn us if it foresaw disastrous repercussions from our work. The SIS declined to be part of the podcast series but never tried to dissuade us from making it.

Today, we hope conversations and debates like the ones we have had over the past year are had around New Zealand. It's in the public interest.