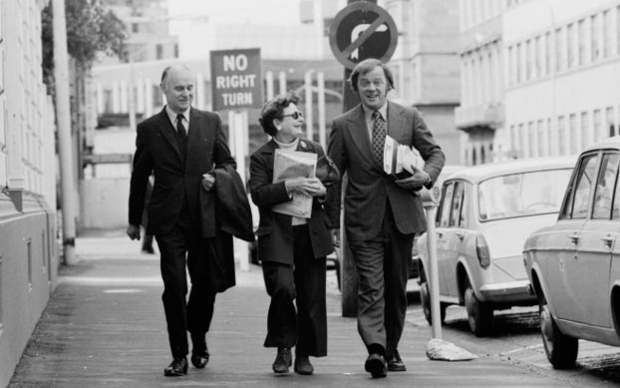 By all accounts, Dr William Ball Sutch was charismatic, dapper, handsome, and accomplished. The economist, writer and thinker was one of New Zealand's top government officials during the Cold War, influencing several prime ministers.

But was he also a traitor and a spy?

Bill Sutch died of liver cancer in 1975, just a few months after he was acquitted on charges under the Official Secrets Act of obtaining information that could be helpful to an enemy. His death, at age 68, came nearly a year to the day after his arrest in Wellington, in an Aro Valley park, during an evening meeting with KGB agent Dimitri Razgovorov. The SIS believed Sutch was passing information to Razgovorov, who fled down Aro Road, sprinting away in a rain - a scene captured on camera that would became a famous shot.

Debate about Sutch's guilt or innocence has continued long after his death.

Listen to The Service and read about the series: Click here

A report, declassified by the SIS in 2008, says it had targeted Sutch since 1932, when he first visited the then-USSR, and was the subject of security interest and assessment both in New Zealand and overseas.

According to the file, he was a neat, dapper, swift-walking man who was "pale but not unhealthy looking", had greying, balding straight brown hair, a dark moustache and sharp features. He was born in Southport, Lancashire, before his family moved to New Zealand when he was 11 months old.

Sutch's personality, it said, had been a dominant influence throughout his career and "often been as much the cause of friction between him and his superiors as his leftist, socialistic beliefs and policies".

He was married twice, and was a teacher at several schools, completing his degrees part time. He and his second wife Shirley Smith, a ground-breaking lawyer, lived in a celebrated Modernist house designed by Ernst Plinschke, built in the Wellington suburb of Brooklyn, where Sutch grew up.

As a government consultant and official, Sutch planned the milk in schools scheme and helped set up the Reserve Bank, which allowed government control of the value and availability of national currency. He was a strong proponent of economic independence for New Zealand and was ahead of his time in advocating for the country to move its dominant industries away from agriculture and primary production.

He is also the only person in New Zealand ever to be charged with spying for the Russians, and his five-day trial was a national sensation. But there was no hard evidence brought to the Supreme Court trial, and then prime minister Helen Clark formally exonerated him of suspicion.

But that was before the Mitrokhin Archive. In 2014, a large trove of KGB data was released. A collection of handwritten notes by KGB archivist and defector Vasili Mitrokhin, it provided the strongest hints yet that Sutch had been a spy.

Sutch's detractors pounced on documents that they said identified him as a Soviet operative with the codename 'Maori', though no real names were included. The papers relating to New Zealand material said the KGB had recruited an "ex-high ranking official in state machinery" who was born in 1907, obtained a PhD and retired in 1965.

Those details match Sutch's, who retired as the head of the Department of Industries and Commerce in 1965.

The papers also said 'Maori' had been brought into the fold in 1950 - when Sutch was living in New York as secretary general of New Zealand's United Nations delegation.

If 'Maori' was indeed Sutch - as investigative journalist Phil Kitchin asserted when the papers were revealed - that meant he had been potentially passing information to the KGB for more than 24 years.

But Sutch's supporters, including his daughter, former World Bank economist Helen Sutch, pointed out that Soviet recruiters were well-known for embellishing or flat-out lying about their contacts, being under immense pressure from their superiors.

She told the Dominion Post in 2014 that the allegations were "absurd". Her father was a patriot, "a true New Zealander", whose life was dedicated to his country.

"My father was charged on the basis of a few meetings at the end of his life, long after his retirement, not on anything he had done in his career," she said.

"And even then the charges wouldn't stick."