Police are investigating an attack on a wahine Māori with a moko kauae in the car park at the base of Ōwairaka / Mount Albert. 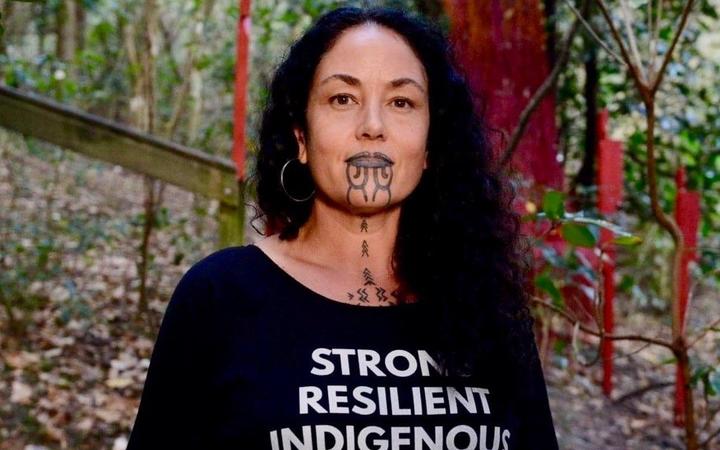 Ngahina Hohaia, a visual artist from Parihaka living in Auckland, said she frequently went walking up Ōwairaka for her hauora.

She said there was a dog wandering in front of her car when she arrived at Ōwairaka about midday on 8 June and she asked the owner, who she described as an older Pākehā woman, if she could put her animal on a leash.

"She replied with 'oh shut up you black b*tch, you disgraceful idiots who go around with this mokos on your face'."

Hohaia said while it was not the first time she had been subjected to a racist attack, she was shocked at the ease at which the woman threw the abuse at her.

She got out of her car, and began recording the woman on her phone, and asked her to repeat what she had just said, at which point, "she lunged towards me and hit me".

Before the attack as she was driving to the mountain, Hohaia said she saw the woman talking to the Honour the Maunga protest group, which has been fighting to stop the felling of 345 exotic trees to make way for native plants, at their tent.

Honour the Maunga spokesperson Anna Radford said the group did not "condone the alleged action".

"We don't know the woman, the matter's in the police's hands. We have naturally cooperated with the police in any way we can but this is an incident that happened between two members of the public, and has nothing to do with our group."

She said the group were co-opting Māori words like "maunga" for their campaign, while undermining the authority of the iwi collective that governed it, the Tūpuna Maunga Authority.

Authority chair Paul Majurey said he had been told by other local Māori they felt uncomfortable visiting Ōwairaka, and security had been increased there as a result.

"We've had a lot of feedback that people do not feel as they had previously that this is a safe space for them and their whānau, people being abused, even tamariki from kura kaupapa being approached and questioned as to why they're there... it's simply unacceptable."

In a statement, West Auckland Area Commander Inspector Grant Tetzlaff said police were investigating the attack, including examining CCTV footage from a nearby area.

He said police were disappointed at the racial overtones of the attack, and had spoken to both the Tūpuna Maunga Authority and the Honour the Maunga group.

Anyone who saw what happened was asked to call Avondale police on 105.