What do Ihumātao and the Kaikōura highway rebuild have in common? 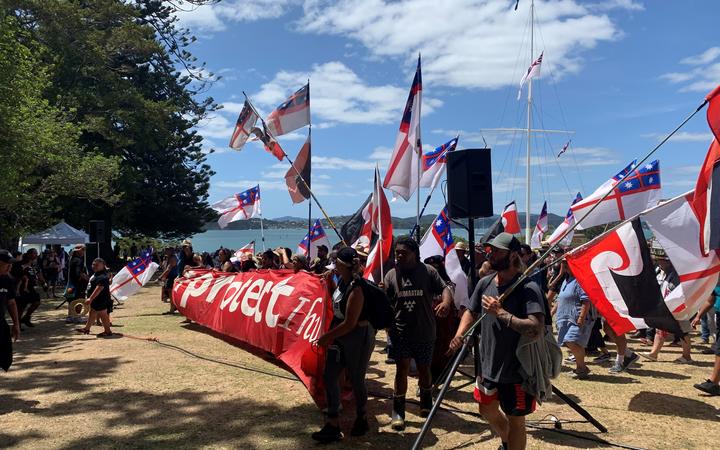 They were consented using types of legislation designed to bypass public consultation in order to build houses and roads faster.

The result: protest from tangata whenua and the public over the desecration of wāhi tapu, and in the case of Ihumātao, years of court action culminating in the largest land occupation since Bastion Point.

Cabinet has approved an amendment to the Resource Management Act, due to be passed in June, which would take away the ability of the public and councils to have an input into large shovel ready projects the government wishes to fast-track to stimulate the economy.

There are more than 1800 project submissions currently before cabinet.

Councils across the country are lining up with their wishlists of new water pipes, roads and even ports, in the hope the government will approve them so they can bypass public consultation.

Auckland mayor Phil Goff, who has 73 projects he's vying for approval, said he wouldn't support removing public participation in normal times, "but we are living in anything but normal times."

Fast-tracking resource consents in times of crisis isn't new - after the 2016 Kaikōura earthquake, the National-led government passed the Hurunui/Kaikoura Earthquakes Recovery Bill 2016, which prevented applications for resource consent from being publically notified, or only given limited notification.

From there, iwi had 15 days to comment in writing on the consent - but the legislation barred them from appealing against it.

Fast forward a few years, and members of Ngāti Kuri (the Kaikōura sub-tribe of Ngāi Tahu) were locked in a battle to stop the Transport Agency building a 3m wide, 18km long walking and cycling path which they said would disturb their wāhi tapu (sacred sites), run over the remains of their ancestors and block their access to the sea to gather kaimoana.

Cycleway proponents said it would increase tourism, with one feasibility study by the Marlborough District Council in 2017 estimating a $19m a year boost to the region's wealth.

But tangata whenua felt they had given enough of their coastline to the rebuild and they marched, petitioned and even threatened occupation if the cycleway was built, resulting in the Transport Agency finally agreeing to stop work in January this year.

One of those leading out the fight against the cycleway was Sharon Raynor (Ngāti Kurī).

"Through the Emergency legislation they blocked the community rights, and freedoms... They stole our Kaikōura coastline, blocked us from mahinga kai areas and digging through cultural significant sites."

"They were supposed to be here to open the roads, but projects continued with many new builds including cycleways and tourism viewing platforms along the coast... Now here they go again - expect this time it's to the entire nation."

It's not just earthquakes and pandemics that prompt the government to pass legislation to speed up resource consenting.

The then-National-led government passed the Housing Accords and Special Housing Areas Act 2013 (HAASHA) to increase supply of housing by making it easier for local councils to rezone land for development.

The legislation did not require full public notification of applications for development proposals, like the one put forward by Fletcher Building to build 480-houses on the 33 hectares of land at Oruarangi in Mangere.

If the public had been allowed their say, that development would never have been approved, occupation leader Pania Newton said.

She was skeptical of the small panel of experts, chaired by an Environment Court judge, that would be tasked with approving consent for the shovel ready projects.

"You look to that Court of Appeal case which found the EPA failed to take into consideration Māori values and to uphold Te Tiriti o Waitangi, and so to me, I just question these agencies and wonder if they are properly and adequately protecting the rights of Māori and including Māori in the decision-making process."

"If the government aren't careful, then potentially they could face issues like Ihumātao in the future as a result of this proposed law change."

Even the Resource Management Act itself is not treaty compliant.

The findings of the Waitangi Tribunal report into freshwater, published in August last year, were unequivocal: the resource management act did not uphold Te Tiriti o Waitangi.

This was not the first time the Waitangi Tribunal had ruled this - the Ngawha tribunal in 1993, was the first to report the treaty clause in the RMA was weak, as it did not require those exercising power under the Act to conform to the treaty, only "take [it] into account."

The freshwater report noted that various other tribunal panels had found the RMA breached the treaty, but "very few recommendations made in previous Tribunal reports have been implemented."

These recommendations include: improving mechanisms for delivering control to Māori, capacity building for Māori, and a requirement that decision makers must act consistently with the principles of the Treaty.

"This is a government that ignores treaty requirements and legislation."

The chair of Ngāti Kahungunu, Ngahiwi Tomoana, is representing the Iwi Chairs Forum in negotiations with the government over this proposed new legislation that would bypass the RMA.

He said they should have been consulted before the proposed legislation was even announced.

"The fast-tracked legislation allows for iwi to input later but just the same as any group - NGO, council, affected party - rather than a treaty partner."

While the Minister for the Environment David Parker had reassured him iwi would be apart of the legislation design, Tomoana said there was nothing to back that up.

"We sit here with bated breathe... but it seems like same old, same old."

As Tomoana waits to hear if maybe this time iwi will be treated as partners, the likes of Ihumātao and the Kaikōura cycleway serve as cautionary tales, for how attempts to bypass public consulation can slow, rather than speed up infrastructure projects.