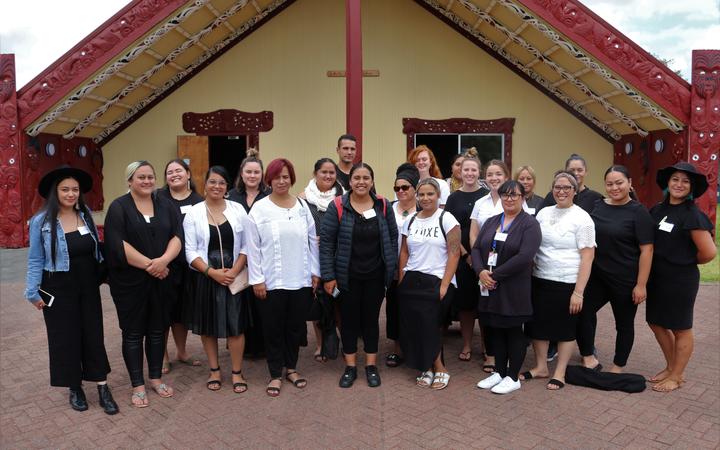 Jade Thompson, of Ngāi Te Rangi and Ngāti Paoa, will be among the first cohort of students to do the programme.

She was inspired to become a nurse two years ago when her pēpi was born 10 weeks premature at Middlemore Hospital.

In the crowded intensive care unit she saw first-hand just how resilient nurses were.

But something was missing.

"What really caught my eye and what made me want to become a nurse is I didn't see any Māori nurses up there," she said.

"All the nurses up there were lovely, but I didn't once see a Māori nurse there."

With part one of the Waitangi Tribunal's health inequities report showing racism at all levels of the health sector, the need for more Māori health workers has become more pertinent than ever.

Thompson said Māori knew how best to work with whānau.

"I feel like there needs to be more Māori nurses in our DHBs. The way that we advocate for our whānau is very different to the Western society, but that's something else that we will learn in this degree."

Head of Nursing and associate professor Deborah Rowe said the degree was open to all students, but it would be centred in te ao Māori.

Māori nurse numbers have remained consistently static at 7 percent for the last 40 years, and most of them are female.

Dean Manga, of Ngāti Kahu and Te Rarawa, comes from a whānau of health workers.

He is the only male enrolled in the programme this year.

"There's very few Māori male nurses, I'm the only one in this course," he said.

"It's awesome that MIT has a course that is not just going to be nursing but Māori-centred nursing as well, and learning to care for Māori that is familiar to them."

Manga has been working alongside his dad at Te Aho Mai mental health unit in South Auckland for the last three years.

He said seeing so many Māori walk through the doors inspired him to become a nurse.

"Seeing how many Māori we have coming through the mental health system, especially young Māori, and seeing the overrepresentation we have in the mental health system and how few Māori nurses we actually have looking after our own people, I thought it would just be the best opportunity to learn more about the culture and how I can help."

Manga said his journey into healthcare had also reconnected him to his Māori roots.

"When I was younger, growing up, you had the cuzzies aroud the marae and things like that. Then I moved to Auckland and I became much more distant from it. The school that I went to, it was compulsory to learn Japanese and French.

"Sometimes when I'm at work and I meet a Māori client, I am already a familiar face. I say, hey, chur bro, you know. Having that understanding just breaks the ice. There's a huge need for it."

If all goes to plan, Manga will be working back in mental health as a nurse once the three-year degree is completed.