A woman removed from her family and adopted at birth has told the Royal Commission into Abuse in Care that racism played a part in her adoption. 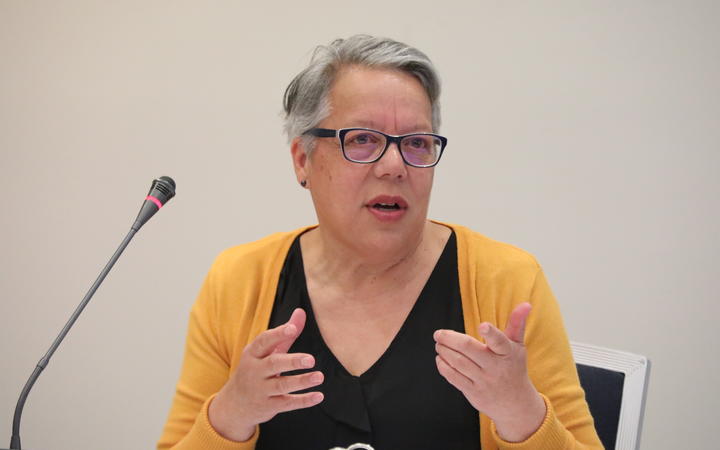 Researcher Alison Green at the second day of the Royal Commission into Abuse in Care hearing. Photo: RNZ / Patrice Allen

Alison Green, of Ngāti Awa, Ngāti Ranginui and Ngāiterangi, is a researcher at Te Kotahi Research Institute at Waikato University.

Her postdoctoral research compares legislation and policy for the removal of indigenous children from families in Aotearoa New Zealand and Canada.

She was removed from her whānau 10 days after birth and adopted out to a Pākehā couple in 1958.

Dr Green told the hearing that the separation from her whakapapa, whenua and whānau resulted in traumatic consequences throughout her early life and since.

She said her adopted parents later told her that welfare authorities at the time told them to say to people that she had a touch of Spanish blood to cover that fact she was part Māori and that her birth parents did not want her.

She finally was able to make contact with her birth mother after the passing of new adoption laws in 1985.

Her birth mother was told that her daughter's life would have a better outcome if she lived life as a Pākehā.

Dr Green said her adoptive parents, originally from the United Kingdom, were told that recent immigrants were given bad or hard to place babies, because this was the hierarchy around adoption at the time in the late 1960s.

Her birth mother suffered from post traumatic stress because of the adoption and broke off communication after a while.

Dr Green said it was not until meeting her birth mother at the age of 21 that she finally was able to answer questions about her whakapapa.

She said knowing about her whakapapa later in life made it difficult, because the richness of growing up with her people, attending hui and events could never be retrieved.

Dr Green said this was why she had made it her life's journey to make sure her children and mokopuna know about their background.

Dr Green told the Royal Commission that the Crown was breaching the Treaty of Waitangi when it removed Māori children from their whānau.

She said the removal of children needed to be addressed urgently, and that Māori children should not be put into care outside of the whānau, hapū or iwi.

She said there was a lot of scope for placing children and it should not require any state intervention.

Dr Green said she was not a fan of tinkering around the edges of legislation because it needed substantive change.

She spoke of three nephews and nieces removed by the state - a two-week old baby, a two-year-old and four-year-old.

She said they had been taken far away from their home and contact with the whānau had dwindled.

Dr Green said the children were reported to be thriving, but she disputed that.

She said Oranga Tamariki offered whānau no support before children were taken and that it seemed to her that it watched and waited.

She said the inevitable happened and then Oranga Tamariki swooped in and took children into care.