Tears have been shed, hymns sung and hopes for the future expressed at the second day of Te Pūtake o te Riri - the New Zealand Wars commemorations in Taranaki. 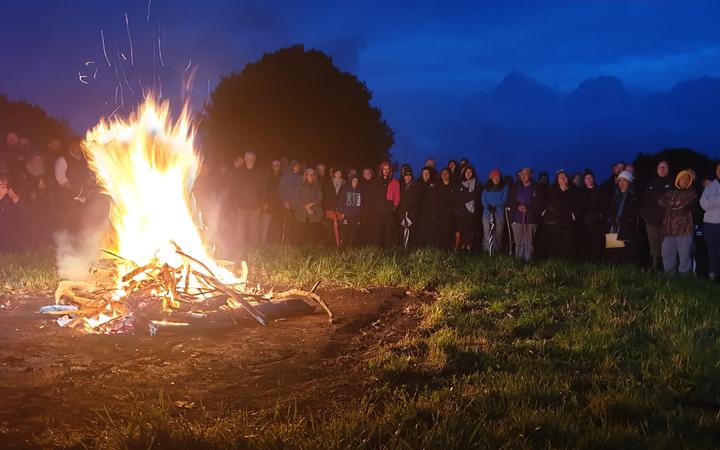 Hundreds gathered in the early hours at Te Kohia pā, where the first shots of the New Zealand Wars were fired on 17 March, 1860. Photo: RNZ / Robin Martin

Activities started early with a dawn service and the lighting of a ceremonial fire at Te Kohia pā on the outskirts of Waitara.

Between 200 and 300 people braved the rain to gather where the first shots of the New Zealand Wars were fired on 17 March 1860.

Te Atiawa rangatira Wiremu Kīngi Te Rangitāke and his military chief Hapurona had deliberately provoked the British into firing on Te Kohia pā, which had been hastily built on disputed land. 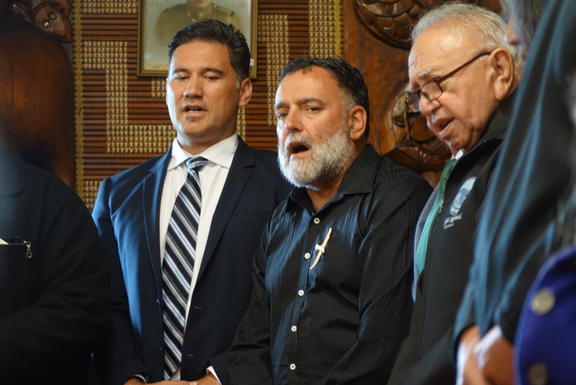 "We have continued to meet here. I think it was on the 150th anniversary we reinitiated the 17th of March to hold an event so we come here on the morning of the 17th and acknowledge Hapurona, acknowledge the people who stood alongside him and the plans that were used by our tīpuna to stand their ground."

The ceremony at Te Kohia involved karakia, waiata, haka and the burning of rākau or sticks representing the iwi present.

It was enough to bring tears to the eyes of Pākehā couple Margaret and Ken Crawford who live on nearby Waitara Road.

"We know both Māori and the British have been across our land. We have found part of a cannon ball on our land and we know people in Pennington Road who also had a cannon ball there.

"When we moved here in 2002 we became aware for the first time that we are only custodians of the land. That we don't own the land and that was what was particularly special to us and why we are here this morning."

Waitara kaumātua Ramon Tito, 82, had his own memories of Te Kohia. 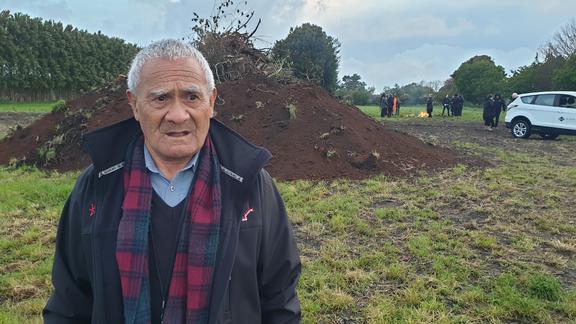 Ramon Tito at the Te Kohia pā site, where he says he's made his own fond memories of. Photo: RNZ / Robin Martin

"We used to play here everyday and we'd get a growling everyday but we still came over there and played. And of course I went away. You know, you go away for work and what have you but we always used to come back here.

"And when we came back we used to come here and do what they've done [today]. We did karakia and it was the same."

British troops who fell in battle were also remembered at a service at the Waitara Military Cemetery.

Hoani Eriwata said it was important to recognise the 34 soldiers who lost their lives at Puketakauere pā and Matarikoriko pā in 1860.

"You need to also pay homage to the enemy. I guess the other side. It's just honouring them and remembering them, but it is also to do with acknowledging that happened and that life always continues on but without holding any bitterness." 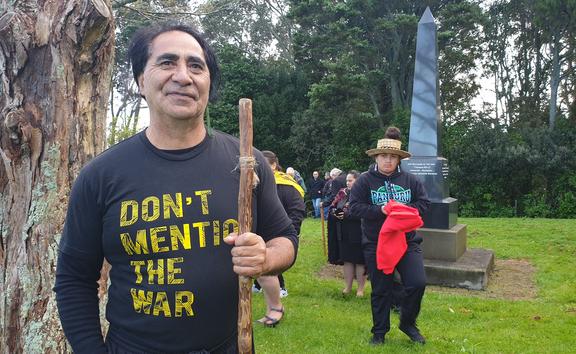 Hoani Eriwata says it's important to recognise and honour the other side too. Photo: RNZ / Robin Martin

Buses ferried Te Pūtake o te Riri participants to notable battle sites this afternoon, including Pukerangiora where the First Taranaki War ground to a stalemate in 1861.

Under Major-General T.S. Pratt, the British had dug their way up the slopes towards a new pā at Pukerangiora using a system of redoubts and covered trenches called saps. As Pukerangiora hapū member Anaru White, who was one of the guides, explained.

"Pretty much sapping was an attack technique because of all the trenches and warfare the iwi and hapū were using, I suppose the strategy the Crown used, was the sapping and it took them a long time to do.

"You can see this and when I talk to Kelvin Day and other historians around, they still think this is one of the better examples of sapping today." 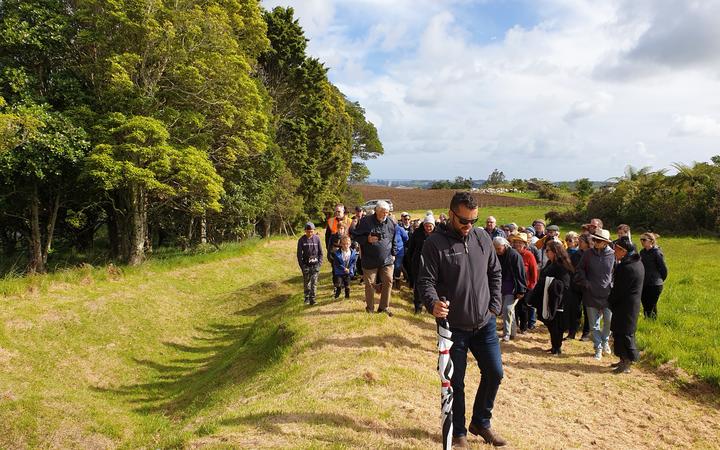 Mr White said Te Pūtake o te Riri had presented the hapū with a great opportunity to tell its stories and think about how it might want to do so in the future.

"So that when people come here they don't just see a [Department of Conservation] sign saying Pukerangiora Historic Reserve. They know that actually something did happen here. And people know when they come here, they can feel it. And it's important that while they are feeling like that to have those stories on site."

"I'm finding it's a cool experience. It's a first up experience for me. Yeah, I was just brought up by my uncle and I just want to pass it on, look after our future and hopefully carry it on.

"Learn new things and why we do this and what happened back then and why we do all sorts of stuff and all that. It's a cool event to be a part of."