Te wiki o te reo Māori - Hinematererangi Mackey-Pasene has grown up in Māori spaces her entire life but says she's now adjusting to life among the "minority" at university. 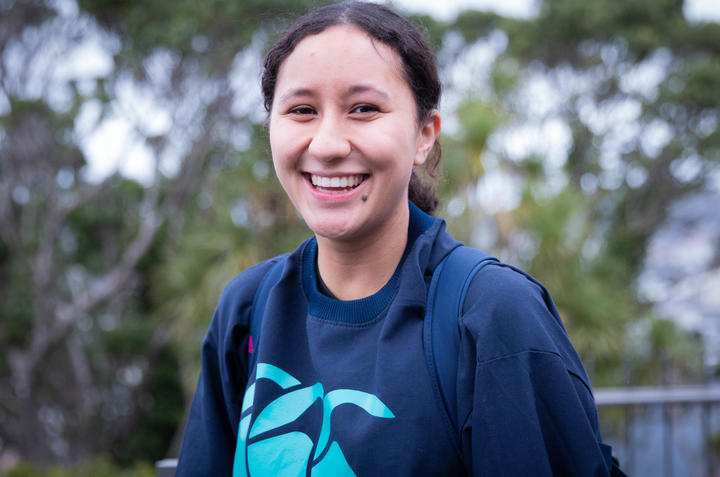 "It was really weird because I spent five years with girls who I grew up with. Suddenly, I'm in a building with 400 people, which is more than my school had, and they're all Pākehā and they all look the same. And I'm, like, I don't know how to talk to these people.

"Where ever I've been I've always been with the majority, and that majority has always been Māori. Māori tikanga was always there. Now I don't hear the language as much and the way we as Māori go about things here isn't understood by the collective.

"That's why I take the Māori courses, so that I can keep it up."

Ms Mackey-Pasene went to kōhanga and then to a bilingual primary school for eight years before entering St Joseph's Māori Girls' College.

She can speak te reo Māori fluently, as well as English, and move seamlessly between the two.

"I never put much thought into my ability to speak te reo growing up. I could just switch between the two.

"Māori was a compulsory subject at school from year seven to year 13. In my first year I got the Māori award."

Being among the very few Māori students at university doesn't frighten Ms Mackey-Pasene.

She said her upbringing has enabled her to stand strong in her identity.

"I think it's easier for me to know who I am here. Being Māori and speaking Māori is a big part of how I understand who I am.

"I know no matter where I am I will always have it with me, and carry it with me. If I don't have my Māori, what do I have?"

Ms Mackey-Pasene, who is majoring in Māori studies, still doesn't know what she might pursue as a career one day, but she said te reo Māori would always be a part of her life in some way.

And university has opened her eyes to just how much she didn't know about the language.

"Like, grammar, there are so many rules. When I used to write, I just heard the word and it fit, it sounded right. That's how I figured out how sentences worked. I have a lot to learn because I've only ever learned te reo by ear.

"When it comes to structure, I'm lost. That's why university is kinda hard because they're always talking about structure. But now I'm learning why sentences are the way they are."

Her favourite thing about te reo was just being able to speak it, she said.

"I love the fact that I can speak it and converse with it. Especially in public. If you're in an uncomfortable situation you can just talk to people in Māori and no one else knows what you're saying."