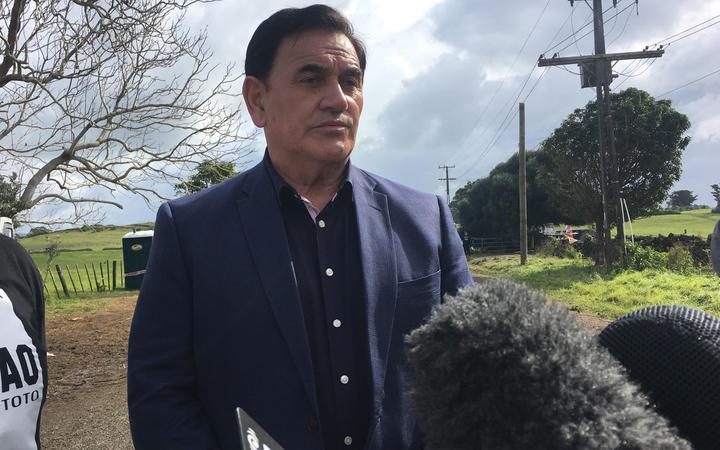 Mr Haumaha was welcomed onto Ihumātao on Tuesday, following a tense standoff on Monday night between police and mana whenua, who oppose the Māngere site being developed for housing.

Miscommunication between the police and protesters led to the tense standoff, he said.

Mr Haumaha has assured the occupiers he will ensure that does not happen again.

"We've got to a point now we can minimise the police presence on this whenua and just maintain a small number around the health and safety for everyone," he said.

"We have arrived at a good point to prevent any miscommunication that may have occurred in the past and so to avoid that we have appointed somebody to come along and sit alongside the organisers that are here and continue to work together along those lines."

Mr Haumaha couldn't specify the exact numbers they would be reduced to.

He also wouldn't address allegations that Save Our Unique Landscape (SOUL) representative Pania Newton was pushed on Monday night, but said he had spoken to her and he wanted to move forward.

As dialogue continues police presence at the site will remain and "it is likely to involve greater use of our iwi liaison officers and Māori responsiveness managers, plus other community staff," police said.

"Protests organisers have also given an undertaking that there will be no attempt to re-occupy the area currently fenced off and subject to the eviction notice which was served on 23 July.

"They have also agreed to remain peaceful while a resolution to this complex situation is discussed by the relevant parties."

Protesters called for more supporters on Monday night, after police numbers swelled in what Ms Newton said was a "very intimidating" five-hour standoff.

Protesters have been at Ihumātao for years protesting against a planned housing development on what mana whenua say is wāhi tapu land bordering the Ōtuataua Stonefields Historic Reserve.

Local mana whenua are split on the issue, with some leading the SOUL group and others backing the developers.

On Tuesday, protesters at the site felt the trust had been broken with the police.

But mana whenua representative Haki Wilson said he believed after the face-to-face meetings, it's been restored.

Mr Wilson said he was certain that protesters would stick to the peaceful kaupapa.

"We have been reinforcing our manaakitanga to make sure our tau te rangimarie and our rongo is within our camp and that's our tikanga."

SOUL representative Stephanie Tawha said they wanted to ensure they worked with the police for all who stayed and visited the land.

"Moving from a position of them being here as enforcers to being here as part of the safety plan that we have. So how they'll be here will be our collaboration together on moving from what it has been to 'let's work for the safety of everyone'." 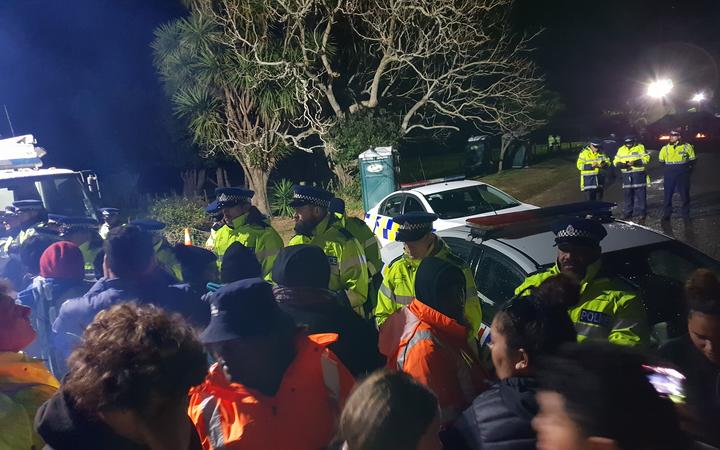 Police will step back after increasing their presence at Ihumātao on Monday night. Photo: RNZ / Liu Chen

However, Counties Manukau district commander Superintendent Jill Rogers rejected that, along with the idea that deploying more officers to the front line could have inflamed the situation.

"Our tactics were in response to the information that we received directly from the protest organisers of their intention that they were going to breach our lines and reclaim the property from which they're prohibited from entering," Ms Rogers said.

"As the night unfolded, it became an incredibly dangerous situation... I can tell you from their commanders it was not a nice position to be in to have to scramble staff like that.

"It became really unsafe for our staff, hence they were pulled back to a position of safety."

But SOUL's Ms Tawha said that was a huge miscommunication.

"On the Monday evening the communication came out that police thought we intended to go and occupy kaitiaki village - that was never our intention - we were actually hunkering down to cook dinner. It was really unexpected but we have decided we want to move forward from that because we have agreed we don't want that to happen again," she said. 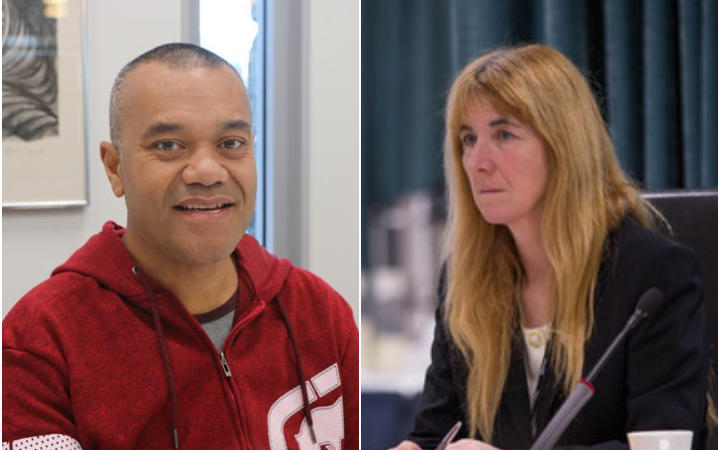 Auckland councillors Efeso Collins and Cathy Casey yesterday called for a reduction of the police presence at Ihumātao, saying it had run roughshod over Prime Minister Jacinda Ardern's commitment to peaceful and honest talks to resolve the situation.

Auckland Council has also agreed to add almost nine hectares to Ōtuataua Stonefields Reserve, which borders the land at Ihumātao.

Auckland Mayor Phil Goff said rezoning the land was the council's gesture towards finding a resolution at Ihumātao.

"It's council-owned land so there was no problem in rezoning it, there was no extra cost to the ratepayer, 9 hectares of land is a significant size piece of land, it adds to the Stonefields area and it says look we recognise this area is important, it's the area that's probably the oldest inhabited area in the whole of Auckland, Tāmaki Makaurau and that is something that we can put on the table," Mr Goff said.

The council had tried to keep the Ihumātao block zoned as public space, but lost the battle to the Environment Court in 2012, meaning there was nothing more the council could do, Mr Goff said.

Meanwhile today, Ihumātao has hosted a range of people including Dr Emalani Case from Hawaii, who is the niece of Mauna Kea leader Pua Case.

Also prominent lawyer Annette Sykes and a large group of Māori nurses from Te Rūnanga o Aotearoa - NZ Nurses Organisation were also welcomed on to the whenua this afternoon.