The government is being urged to revoke a law that prevents Māori from getting their confiscated land back if it has moved into private ownership. 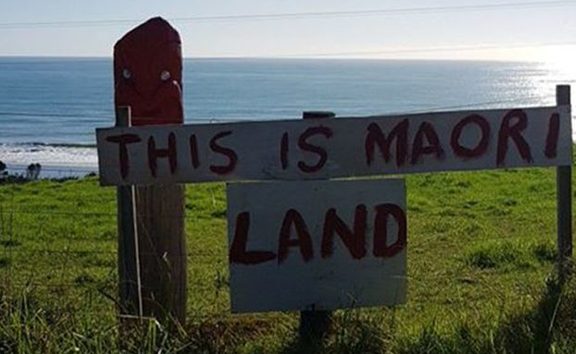 Haumoana White and his family are refusing to leave the land they say is theirs, but a Māori Land Court order says it belongs to their neighbour. Photo: TE KAWAU PROTEST / FACEBOOK

"It is a completely unfair process for Māori because they never really have the opportunity to seek the return of land that they have lost," Mr Williams said.

"Often that is the rationale that our people get into this process, to seek the return of lands lost and that's just not available to us in the current system."

The only exception was when the land had Section 27 B memorial titles.

However, there was not a lot of that land and its owners were well aware that it could be returned to iwi.

The government could purchase back private lands to return to iwi in their treaty settlement, but rarely did, Mr Williams said.

"Generally they're pretty adverse to try to do that, they will often say that 'We don't have the money in order to do that'.

"Secondly, they will then say there are other properties which are not held in private ownership which are available for return... they will encourage those in negotiations for example to utilise whatever their quantum is to purchase other lands back."

Ngai Tamahoua deputy chair Tim Herewini said the laws should be adjusted to allow for the return of private lands to Māori in settlement because otherwise, the process was unjust.

"The amount of land or productive land at least that's in private ownership is close to 100 percent of what there is," he said.

"We are limited in what the government will settle with their very limited land that they still have for us. That has handicapped us significantly, by having that rule."

Mr Herewini said there was a priority when it came to confiscated land in private ownership, and in principle, his hapū wanted all land that was taken, returned.

The law was inconsistent with the United Nations Declaration of the Rights of Indigenous Peoples, too, he said.

The land at Ihumātao, which is currently being occupied by protesters to stop a housing development by Fletcher Residential, was confiscated from Māori in 1863.

But it was not returned to iwi through its settlement because Ihumātao was privately owned, and expensive.

"Ihumātao is just going to be one of the first sites that our people are making a stand on. It wouldn't surprise me if Shelly Bay down in Wellington is going to be the next.

"There are sites around the Gate Pā area in Tauranga ... it wouldn't surprise me if there was going to be a protest at some point."

A growing number of young Māori were refusing to accept the status quo, and they would continue to challenge the government on returning confiscated land to Māori, Mr Tukaki said.

Mr Williams agreed private lands should be made available to iwi in settlement, but he could not see it happening any time soon.

"That would mean placing at risk a whole lot of private ownership issues which is a political nightmare for the Crown so I don't see any appetite for the Crown wanting to change that particular concept.

"But yeah, absolutely I think it should be something made available to our people."

Mr Tukaki said people were fearful of having that conversation because it might turn everyday New Zealand landowners against the politicians.

"The politicians sometimes need to be a little bolder and braver."

The spokesperson for the Ihumātao protest, Pania Newton, has said the issue there is not about the treaty, but about protecting a heritage landscape.

However, it is clear that the land dispute is deeply connected to the treaty.