Desperately fighting to save land at Ihumātao from development, Pania Newton leads a determined collective of protectors in the fight to save the site considered sacred.

Set behind the front lines at Ihumātao, Mana Wahine captures intimate access to SOUL co-leader Pania Newton in the weeks leading up to what is becoming New Zealand's most disputed indigenous land occupation.

As the magnitude of the fight ahead and pressures placed on her become all too real, Pania lays bare her personal struggles to find the strength to lead. As the cultural and political unrest reaches breaking point, Mana Wahine provides unique insight into an indigenous issue resonating around the world.

Mana Wahine is part of a collection of eight Loading Docs short documentaries. The full collection of shorts will be released on 29 August 2019.

Speaking to Morning Report today, Pania Newton said discussions were progressing but the land was significant to New Zealand's history and there was only one message: return it.

"For us this isn't a Treaty issue, this is a cultural heritage landscape issue in that this is the last remaining piece for mana whenua ... within the context of all the land that was confiscated and all the injustices our whānau and our marae have endured for many, many years at the hands of the Crown.

"This land is so significant to our nation's history," she said.

"The Crown need to take responsibility for the heartache that they've caused the people and the environment here in Ihumātao. For us it's just return the land to mana whenua [who] can perhaps consider holding it in trust for all New Zealanders to enjoy as a cultural heritage landscape."

The invitation to Prime Minister Jacinda Ardern to visit was still open and she would be received with respect and under the umbrella of peace, Ms Newton said. 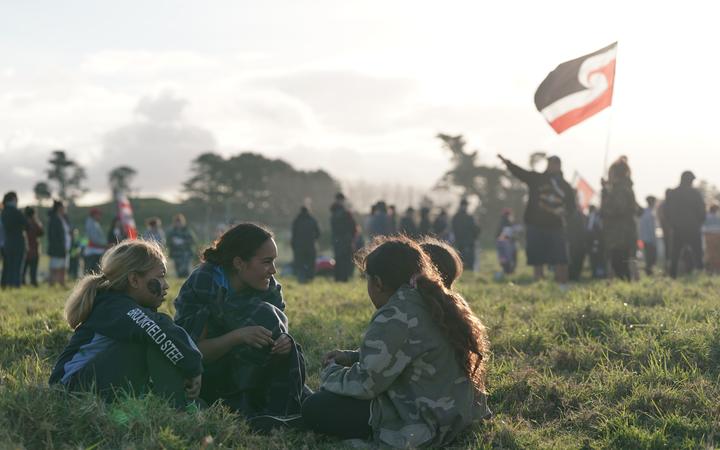 Corinna Hunziker (Ngāpuhi, Ngāti Kahu) is deeply committed to empowering minorities to have their voices heard. She has been directing for five years, most notably on Three's cultural diversity series Both Worlds, providing a platform for minority youth to share their lives and experiences, and has recently held the trainee director position on the upcoming TVOne drama feature film Runaway Millionaires.

Mia Henry-Teirney (Ngāti Kahu ki Whangaroa, Te Rārawa, Ngāti Kuri) is a Māori producer who produced the short film My Brother Mitchell and series one of Baby Mama's Club, and was intern producer on Mahana. Mia is passionate about sharing indigenous stories with global audiences.