An initiative to take te reo Māori out of the classroom and into the wider world comes with a caffeine fix in New Plymouth. 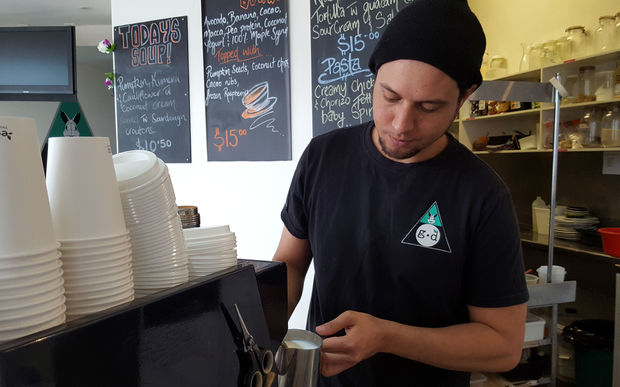 Luke Millard had the idea for Kapu Kōrero after reflecting on his own struggles learning Māori. Photo: RNZ / Robin Martin

Every week the Green Door Cafe hosts Kapu Kōrero, which encourages te reo speakers, learners and the simply curious to practice their language skills in an everyday setting.

Te Wananga o Aotearoa student and ace barista Luke Millard came up with the idea for Kapu Kōrero in June after reflecting on his own struggles as a te reo Māori learner. 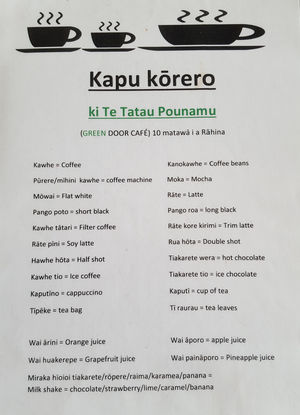 A menu in Māori of things you might want to order. Photo: RNZ / Robin Martin

"I'll do my study and I'll go to my classes but then when it comes to actually applying it you really need to start nursing it and bringing it out in everyday things.

"We need to create platforms to do that, really, so hopefully this is one of many little projects to help encourage that."

Mr Millard and his tutor Stacey Glassie have come up with a "cheat sheet" to help nervous customers take the first step to making an order in te reo Māori, and a welcoming, encouraging vibe is all part of the service.

"We'll give you a good 'kia ora', a bit of a 'ngā mihi' and then 'he aha māu' which is 'what would you like' and then you can choose from the list over here.

"He rāte is obviously a transliteration of latte so kei te pīrangi koe te he rāte, you would like a latte. So you can build your order from the list of words we have here."

After little bit of gentle ribbing from her classmates, Pākehā student Robin Mead headed to the counter to make an order for hot chocolate. 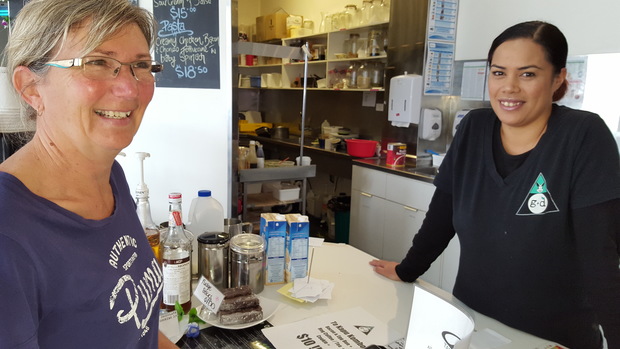 Ms Mead said she started learning te reo to better understand Māori culture and Kapu Kōrero was perfect for her.

"I think it is particularly useful for people like myself because I have no one to practice with," she said.

"I always go home from here thinking a bit more in Māori and, you know, putting it more into my daily life, whereas the last couple of weeks I've been away and it's kinda all gone - so it's really good to have that opportunity to practice."

Originally from Thames, Tomilee Bidois was reconnecting with the language.

Ms Bidois said she was in awe of the Pākehā students on her course.

"They're not Māori but they love it too, and you know to hear them speak especially ... and I shouldn't say it and I'm not racist or anything, but white people are awesome at kōrero Māori.

"I was like 'oh damn' you know they're awesome and it would be really really good to see more Māori sprecifically as well kōrero te reo Māori kei waho around town and everywhere."

Māori language tutor at the Western Institute of Technology Bernie Edwards had also dropped by for a kōrero with some of his students. 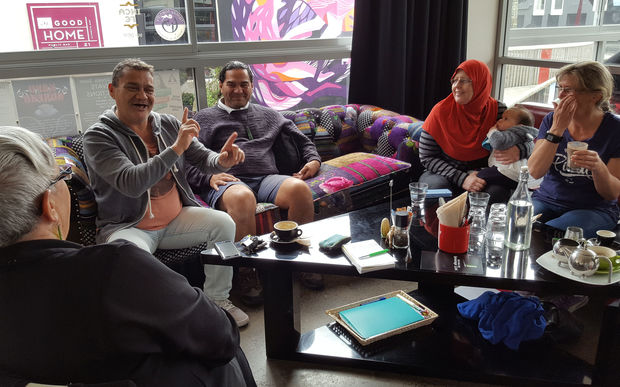 He said the Kapu Kōrero initiative was fantastic for learners.

Mr Edwards said the normalisation of te reo Māori was vital for its revitalisation.

"This is the next step now, getting communities together of Māori language speakers. To have communities that can start to grow, interact with one another and get to know one another.

The Green Door Cafe hosts Kapu Kōrero every Monday morning between 10am and midday, and everyone is welcome.