MPs have been urged to back a petition calling for a national day to commemorate the New Zealand land wars. 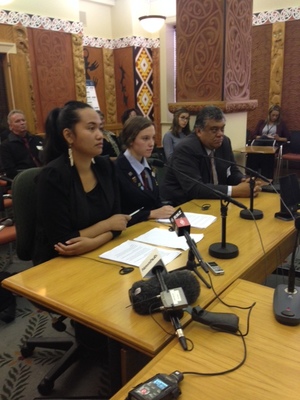 The students are calling for a day to mark the land wars and for the history of those events to be taught at schools.

The MPs were told that there were more casualties in the Māori land wars than the New Zealand casualties of the first World War.

Miss Anderson said the knowledge of the blood shed on New Zealand soil was inadequate.

Whanganui MP Chester Borrows agreed and said there was a lot of history of land wars in his electorate but the local schools were not taught about it.

Head girl Leah Bell told MPs that a day of commemoration will heighten the awareness of the nation to its history.

"We believe it will add to the concept of nationhood as we seek to recognise in a formal and meaningful way, the colonial troops and Māori warriors and families who were killed, wounded and survived the wars here in Aotearoa."

Leah Bell said they were not calling for a public holiday or a paid-day off but urged the committee to discuss the idea.

When asked, the students said it was not for them to decide which day should be chosen.

"When we get a referendum, I am sure that is when we can put our input in," Ms Bell said.

Committee chair Tutehounuku Koraka told the students that the committee would consult with the Ministry of Education before reporting back to Parliament on the petition.