The chairperson of the repatriation programme for Te Papa Tongarewa says museums around the world are more reluctant to part with Maori tattooed heads than skeletal remains. 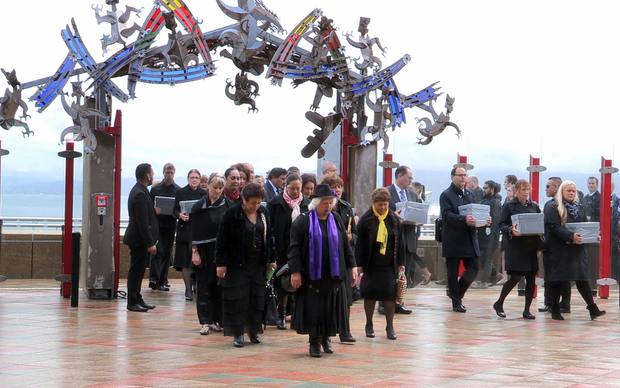 A ceremony was held at Te Papa's marae on Friday to mark the return of ancestral remains. Photo: RNZ / Diego Opatowski

Pou Temara, who took part in last week's repatriation ceremony for 107 Maori and Moriori remains, said museums regarded Maori tattooed heads as art and there was a reluctance on the part of institutions to part company with them.

Professor Temara said Maori of the current generation were caught up in the controversy surrounding the heads' trade and now regarded carved heads as being rather macabre when they were not.

"Toi moko have become associated with the trade that occurred between Maori and Pakeha, but actually are of real significance to tangata whenua.

"The prominence of the tattooed heads came around because of the trade in heads, but the preservation of heads is part of the Maori culture and has always been there," said Professor Temara.

"A comparison in today's terms is bringing out photographs of people who have passed on and then having the opportunity to think about them, to mourn over them. For those reasons our ancestors developed a technique of preserving heads and bringing them out every now and then."