Last weekend I predicted that the Super Rugby Trans-Tasman competition, despite history suggesting otherwise, would be a bit closer than people thought.

Of course, I will freely admit I did not pick the two hairline margin results of the first round to come in the games they did. While it was a 5-0 whitewash to the New Zealand teams in the games played over the ditch, the Brumbies and Force went within a conversion each of pulling off huge statements against this year's Super Rugby Aotearoa finalists. The other games were one-sided, for sure, but offered up a few talking points nonetheless. 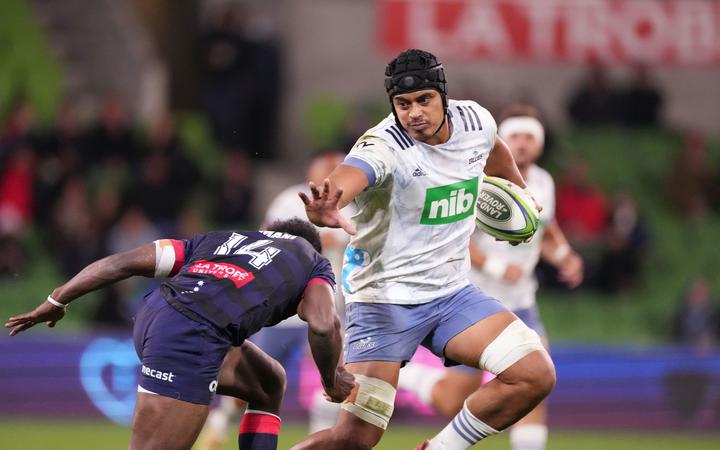 Gerard Cowley-Tuioti of the Blues runs with the ball during team's 50-point demolition of the Melbourne Rebels Photo: PhotoSport

It was obvious on Friday night that the Reds were probably still feeling the effects of the hangover they earned after their Super Rugby AU title win the weekend prior. It took the Highlanders less than a minute to score a try, and despite a brief fightback by the Queenslanders, they were rightfully dominated. The hiding dished out was probably the worst way the new competition could start, given that the Reds were the Australian champions and the Highlanders have played their usual battler role in the Aotearoa edition.

But then came a bizarre game played, fittingly, at the Sydney Cricket Ground. The Hurricanes clearly showed up thinking it was going to be a glorified training run, given how awful the Waratahs have been lately. And to some extent they were right as they managed to rack up 64 points, their highest score in years. The problem was the Canes almost to a man forgot how to tackle, shipping 48 the other way, and leading all of us (old enough) to think somehow both teams had been sucked into a wormhole and spat out in 1997, the golden age of defence-optional Super Rugby. Despite scoring their highest total in a long time too, the Tahs were ominously pathetic on the other side of the ball, which does not bode well for their trip to Eden Park next weekend.

That's because, within the space of 40 minutes, the Blues clicked back into being the massively confident and entertaining team most of us want them to be. A debt of gratitude can go to the Rebels for that, who sat back in the second half and let the Auckland side run riot. Their first try, to Tom Robinson on the stroke of halftime, will go close to being one of the best you'll see in any competition anywhere this season - then their fifth to AJ Lam a very close runner-up.

So far, so bad for the Aussies. But in the one game that no-one thought they would get close in, the Brumbies almost pulled off a massive upset against the Crusaders in Christchurch. Had it not been for a very rough call for infringing at a lineout inside their 22, the Brumbies may well have taken the lead long before Rob Valetini crashed over for his last play try in the corner. Noah Lolesio, who had suffered a torrid test debut last year against the All Blacks in Sydney, watched his conversion slide away to the left and dropped his head in defeat - reminiscent of the iconic picture of Springbok Jack van der Schyff's missed winner against the British Lions in 1955. In a lovely moment, Lolesio was immediately embraced by his team mates regardless of the 30-29 scoreline.

Rate this from the Brumbies. Noah Lolesio narrowly misses a conversion that would have earned a 31-31 draw with the Crusaders. Whole team around him very quickly. pic.twitter.com/2llutXAMXd

Then over in Perth, the Chiefs made it look like business as usual by opening the scoring in their match against the Force in the first five minutes. However, the next set of events will be a very solid rebuttal as to why red cards do not, in fact, ruin games. With Luke Jacobson sent for a second professional foul, the Force came storming back and scored a try through Richard Kahui of all people. The former Chiefs man and perennial pretty boy closed the gap up to six points, then watched on as Argentine Diego Miotti scored what could have been the winner after the hooter sounded.

Like Lolesio though, Miotti's kick faded away to make the score 20-19, but after he'd angrily thrown his mouthguard to the turf, found himself wrapped in the arms of his smiling team mates. After a week of rugby doing itself no favours in other areas, this was a scene that no one minded seeing repeated. 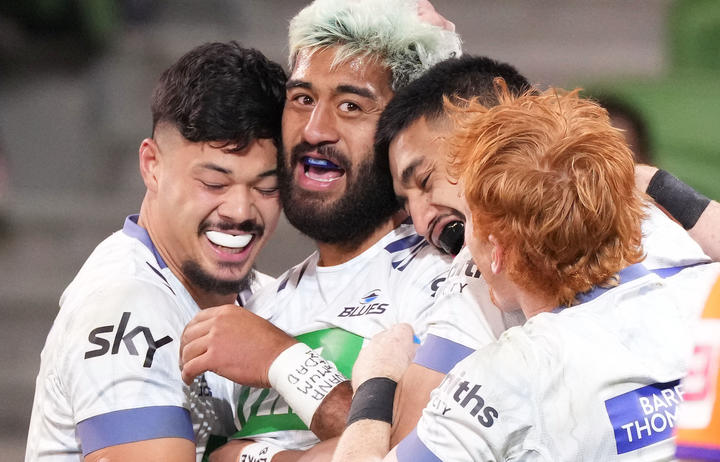 The Blues Akira Ioane, centre, after scoring a try in Round 1 of the Trans-Tasman Super Rugby against the Rebels at AAMI Park in Melbourne. Photo: Photosport/ Scott Barbour