A decision on who'll lead the Silver Ferns in the absence of Laura Langman is expected tomorrow. 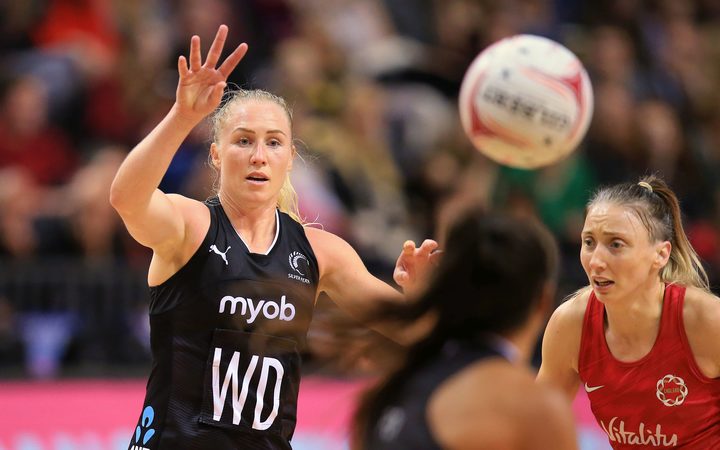 The Silver Ferns on the hunt for a replacement for Laura Langman. Photo: © Actionplus 2018

The New Zealand side flew out late last night for next week's Nations Cup tournament in England captainless with Langman and fellow veteran Katrina Rore taking time out of the international game after a busy 2019.

Defender Jane Watson, shooter Ameliaranne Ekenasio and midcourters Gina Crampton and Shannon Saunders are contenders for the captaincy and have been part of an interview process over the past week.

Coach Noeline Taurua says she's not making the decision simply by player vote as she has done in the past.

"That's still a part of it (the player vote) ...but now I am looking more at relationships, performance both on and off the court - from a broader perspective. It's more in depth and doesn't just involve the players but myself, our high performance director and our CEO Jennie Wyllie," said Taurua.

"We've started the process which is around the rankings and asking some in depth questions of players."

Taurua is keen to have all players undertaking some kind of leadership role, "so that we can manage the load and it's not just on one person".

Taurua said whoever takes on the captaincy role will naturally be inexperienced with Langman and Rore not on the tour and Maria Folau having retired last month.

The final decision on who gets the job will be a "collective one" said Taurua.

"I know people don't like this but it will be a collective decision."

There's no guarantee that either Langman or Rore will return to the international stage after time out.

"I've had discussions with Laura about what needs to happen if she returns and the same with Katrina, - but we have got to look at the now knowing that we do have an inexperienced side and we have got to share the load until they build up experience."

The Silver Ferns first game of the tournament is against England on Monday.