As the dissections of that game begin, Megan Whelan takes a look at what the international media has to say. 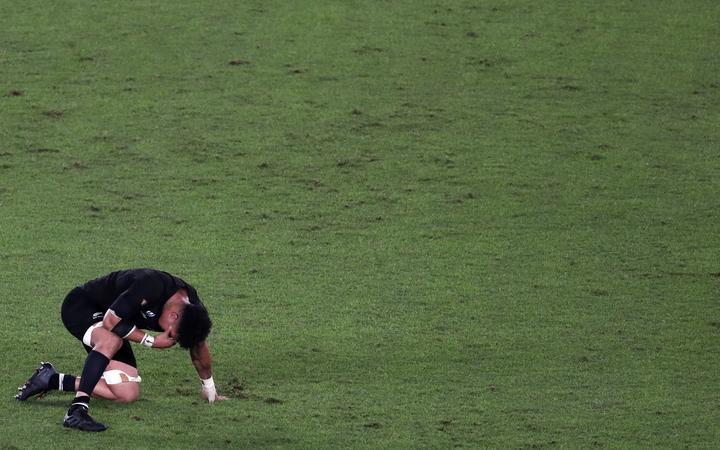 All Blacks flanker Ardie Savea reacts to his side's loss to England in the Rugby World Cup semifinals. Photo: AFP or licensors

In the Guardian, Robert Kitson calls the game stunning and significant.

"As an advert for rugby the entire game more than lived up to its advance billing. From the moment England formed their own deliberate V-shaped arrowhead to greet the haka, encroaching slightly into the Kiwi half for extra effect, there was an edge to proceedings and the opening minutes saw a similar statement of intent."

New Zealand were supposed to emerge for the second half like a wounded animal. England had rocked and out-rucked, even out-leapt at the lineouts Steve Hansen's side had so pointedly targeted. For each inch that Eddie Jones' side played brilliantly, they had strangled the myth of the All Blacks far from reality.

The Daily Mail took a swipe at the TMO, but also praised Eddie Jones' men.

'Crash, bang, wallop,' went the sound of the All Blacks being smashed off their pedestal and sent flying into next week. Every All Black dropped to their haunches on the final whistle because they did not know what had just hit them. Bloodied, bruised, battered.

Guys I know it hurts, but theres young English kids here crying and cheering, and old men telling me how proud and humbled they are to win..

I’m at the absolute heart of English Rugby fans and they’ve been damn graceful about it.#ENGvNZL #RWC2019

Over the ditch, Eddie Jones was in for praise too, this time in The Age.

Steve Hansen's penultimate game in charge was an absolute flop as the All Blacks' hopes of making it three World Cups in a row were blown up in smoke at the hands of an England side whose poise and defence was nothing short of heroic.

In Japan Today, Mitch Phillips uses the phrase "totally outplayed" to describe the All Blacks.

After showing their intent not to buy into the "All Black aura" by defying the officials and lining up against the haka in a V formation, England backed it up once the whistle had sounded, scoring a brilliant try through Manu Tuilagi in the second minute after a sustained, high-paced assault that swept the width of the pitch.

Immense effort by @EnglandRugby, many congratulations to the whole team. Now for the final! #ENGvNZL #RWC19 pic.twitter.com/7qbTsnHl11

Are we allowed to say "rucking hell" on RNZ? They are over at The Sun. The BBC played it a little cooler, calling it a "brilliant demolition."

"And with tournament favourites New Zealand running out of ideas as the game entered its dying moments and English tacklers pummelling their ball-carriers, Jones had pulled off yet another underdog triumph."

As for who England will play in the final - head back here for RNZ's liveblog on Sunday night.