Opinion - Wales' fortunate win over France aside, the Rugby World Cup quarterfinals were much as we expected them. 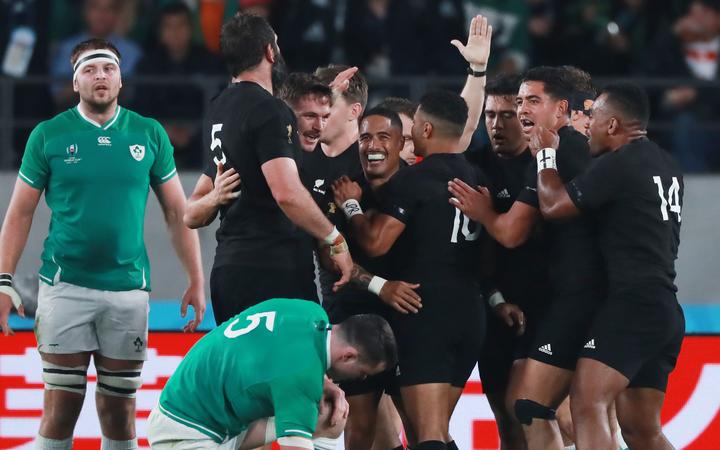 The All Blacks celebrate during their side's 46-14 win over Ireland in the quarterfinals of the Rugby World Cup. Photo: AFP

The good teams won and the less illustrious ones went home.

Let's start with the hugely impressive All Blacks and the England side that now await them in the semifinals.

Ireland's ineptitude didn't hurt and, in all honesty, you'd have to say their's was an abysmal campaign.

They didn't have the tactics or personnel to prosper in Japan, sticking the the box-kicking, rush-defending, attritional style that serves them so well in home conditions.

Surely coach Joe Schmidt realised more would be required to excel at this tournament and, while you can debate whether he had the players to employ a more expansive style of rugby, you'd have to say his gameplans weren't great.

Honestly, paint dries faster than Ireland halfback Conor Murray takes to survey all and sundry and then hoist up another high kick. 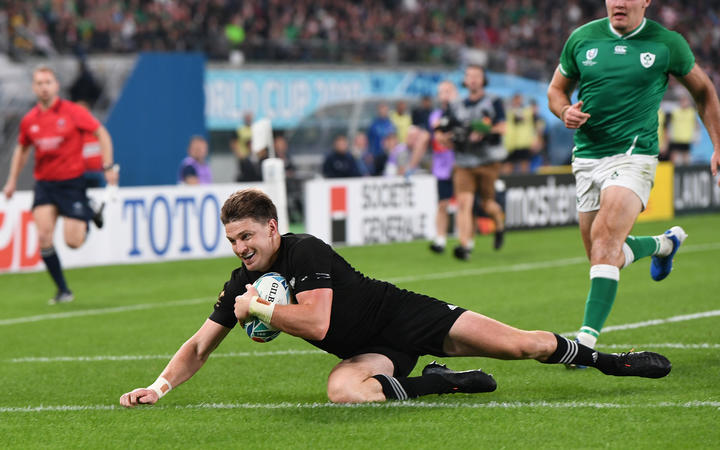 But to the victor the spoils and you'd have to say New Zealand were worthy winners.

Ireland's recent successes against them led to a bit of pre-match caution about how much the All Blacks might win by, but the predictions of a 10 to 15-point margin proved conservative.

Unlike Ireland, New Zealand's tactics and skill-execution were spot on.

They made their tackles and looked after the football and, crucially against a side like Ireland, they were able to dictate the tackle-ball area.

Halfback Aaron Smith hasn't had a stellar tournament but, given some quality ball, he looked far more assured, whether he was feeding those outside him or having a dart around the fringes himself.

All in all, it was an extremely impressive performance from the whole team and highlighted how this side of the draw is far stronger than the one Wales and South Africa have emerged from.

This is a team to be feared.

New Zealand have only met them once in this world cup-cycle, for a fortuitous 16-15 win in London last year.

But for a better Television Match Official ruling, England would have been deserved winners that day.

In Owen Farrell, England have a deadly goalkicker. Manu Tuilagi is a Ngani Laumape-style handful in midfield, while Anthony Watson's handy on the wing.

George Ford is a very useful playmaking option off the bench, if coach Eddie Jones wants to start Farrell at first - rather than second - five-eighth again this week and then you've got Billy and Mako Vunipola, Maro Itoje and Karl Sinckler in the pack.

This is an abrasive, experienced, accurate side who also have enough gamebreakers to beat New Zealand. 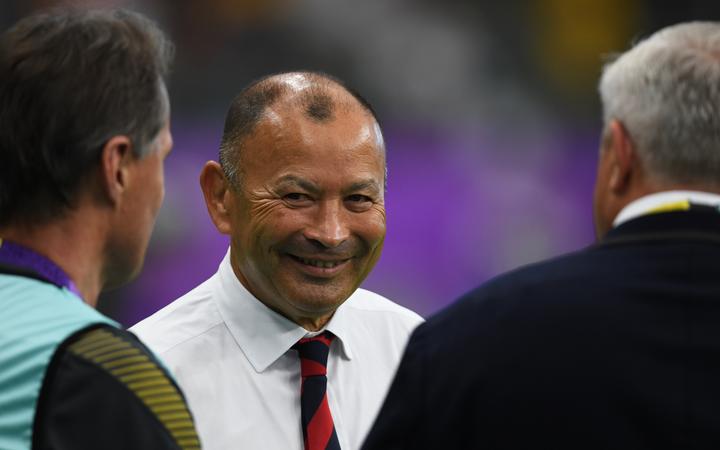 Eddie Jones said following his side's win over Australia in the quarters that he was hoping for an England-New Zealand semifinal. Photo: AFP

Other Home Nations, such as Ireland and Wales, aren't much chop when they get down a few points, but England possess athleticism and skill and, just as importantly, won't be intimidated by the All Blacks.

Jones will see to that, having previously steered Australia to a final, been technical advisor to the champion South Africa team of 2007, then guided Japan to a win over the Springboks at the last world cup.

He is the equal of any coach in terms of experience, success, work ethic and attention to detail and is an enormous asset to England.

This semifinal against the All Blacks looms as the match of the tournament.

The other two quarterfinals are going to be remembered for refereeing, rather than rugby.

Wales' 20-19 win over France was blighted by a couple of decisions.

The red card shown to France lock Sebastien Vahaamahina was entirely fair, but you could argue Wales' Ross Moriarty was lucky to just get yellow for a high shot on Gael Fickou.

Had he seen red, Moriarty wouldn't have been on the park to score Wales' match-winning try.

You say try, only the television evidence made it look very much as if Wales had propelled the ball forward in the lead-up. 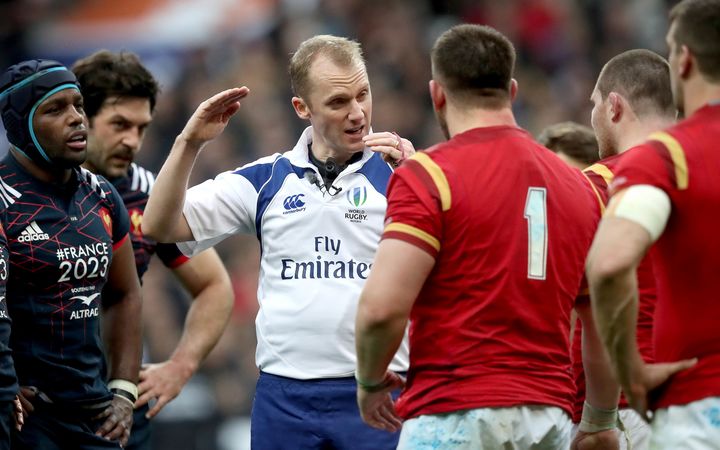 Wayne Barnes (pictured) and South African referee Jaco Peyper had nights to forget in the quarterfinals they officiated, according to Hamish Bidwell. Photo: PHOTOSPORT

Referee Jaco Peyper and Television Match Official Marius Jonker thought differently and it's France with an end-of-season do to organise.

As have Japan, after losing 26-3 to South Africa in a match referee Wayne Barnes didn't officiate well at all.

Barnes and Peyper are among the better whistleblowers around. Both usually have a decent feel for the game and don't seek to dominate and yet each of them had too much influence over the outcome of their respective quarterfinals.

Rugby has a lot to recommend it as a game, but the extent to which officials can manipulate proceedings is not one them.

Let's hope these remaining games can be decided by the players.

Not with a barge pole

Dave Rennie should run a mile from Rugby Australia.

The highly-regarded former Chiefs coach has been linked to the Wallabies job for some time and that speculation only increased once incumbent Michael Cheika confirmed the 40-16 quarterfinal loss to England was his last match in charge.

Rennie is real Test-match material. A two-time Super Rugby winner, who guided Wellington to their most-recent provincial title and has had success with New Zealand's under-20 side and now Glasgow in the Pro14 competition, he's good enough to succeed Steve Hansen as All Blacks head coach. 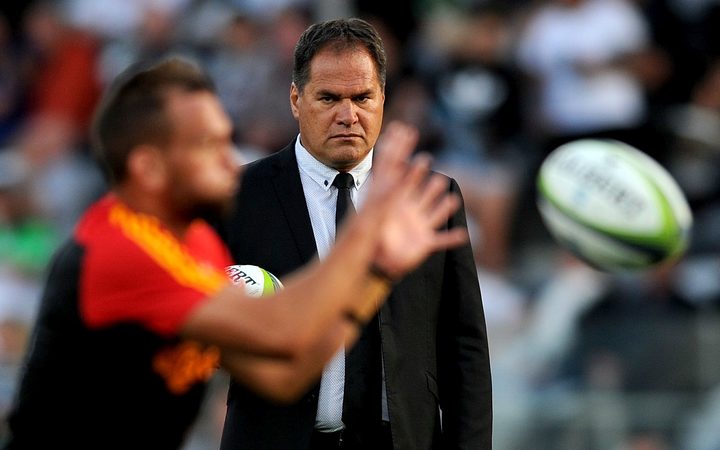 Whether he's spoken his mind too often for New Zealand Rugby's liking is one thing, but there's no denying Rennie's ability or pedigree. He could (just about) take any international side and make them decent.

But Australia? Maybe not.

Rugby Australia are not a great organisation and the country's Super Rugby sides are almost worthy of rabble status.

Yes, there are some raw and talented individuals in the Wallabies and Super Rugby set-ups and Australia are going well at age-group level, but this is the kind of job that could do irreparable damage to Rennie's career.

The challenge is there to take an under-performing team and make them better and Rennie might love that, but it's not easy when your employer isn't especially cohesive.