Michael Cheika has explosively lifted the lid on his broken relationship with Rugby Australia bosses after confirming he will quit as Wallabies coach at the end of the year. 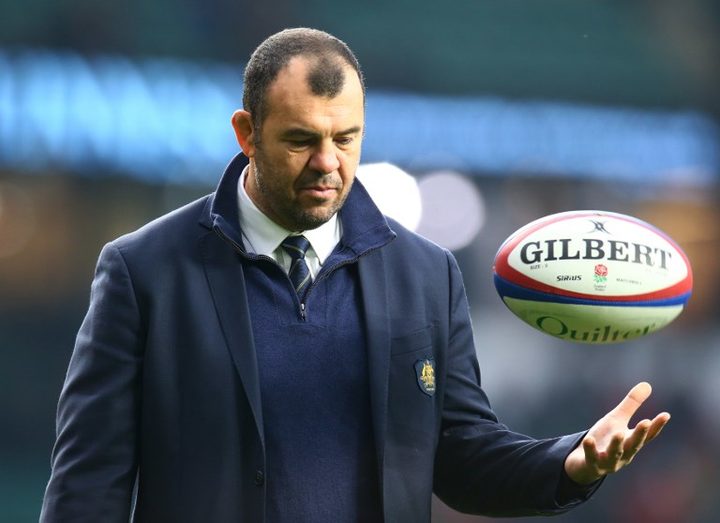 Chieka won't seek an extension to the five years he has served after the Wallabies were beaten 40-16 by England in the quarter-finals of the Rugby World Cup.

Less than 24 hours after the loss, the 52-year-old exposed what he said was a dysfunctional relationship with both chief executive Raelene Castle and chairman Cameron Clyne.

He also said he felt uncomfortable working in the new Wallabies coaching structure in which he was answerable to director of rugby Scott Johnson, who took up the role early this year.

"I think it's no secret that I've pretty much got no relationship with the CEO and not much with the chairman," Cheika said.

"Scott's a lovely bloke and I get on fine with him but I'm sort of not really into that type of thing."

Johnson became one of three selectors and Cheika said having to compromise on elements of his job impacted on him negatively.

"I like to take that responsibility. I found also that it changed my normal routine around things," Cheika said.

"Not that my way's definitely the right way. I'm definitely not saying that, always.

"But that's just the way I like to operate.

"I've always prided myself on not compromising my own values and what I want to do. So I found that a little bit difficult at times, yeah."

Rugby Australia released a statement quoting Castle that didn't refer to any of Cheika's criticisms.

Castle thanked Cheika for his service and dedication and praised his passion for the role.

"He cares deeply about the Wallabies and the game of rugby, and always set out with the aim of making Wallabies fans proud of the team's performances," Castle's statement read.

"Michael came into the role at a turbulent time, and experienced immediate success by taking the Wallabies to a World Cup final after only one year in the job. He was later given the ultimate recognition for that achievement by being named World Rugby Coach of the Year."

Castle confirmed Johnson would lead the process to find a replacement.

New Zealander Dave Rennie has emerged as the clear favourite.

Rennie, who led the Chiefs to twin Super Rugby crowns in 2012 and 2013, is said to share a close relationship with Johnson.

Rennie has previously quashed any link with the Wallabies role, pointing out he had signed an extension with Glasgow that takes him through to the middle of next year.

Cheika plans to see out his contract, which finishes on December 31 to help with any debriefing process.

He is unsure of his future, denying reports he has any agreement to coach at French club Montpellier.

"It'd be very hard to replicate the thrill and the excitement of coaching at international level," he said.

"I've never coached as a job.I've always coached for the thrill or for the pleasure. I haven't thought about it. We'll see what happens next."

His tenure was marked by the successful 2015 World Cup campaign and a disappointing display at the global tournament in Japan, the respective outcomes marking a gradual decline in the team's overall performances.

He made a pledge earlier this year to stand down if Australia didn't lift the Webb Ellis Cup and was simply honouring his word.