There's a lot to take in at the Rugby World Cup, so we're reading all the headlines so you don't need to. Today, the situation in South Africa, as the Springboks prepare to take on hosts Japan, the Brave Blossoms. 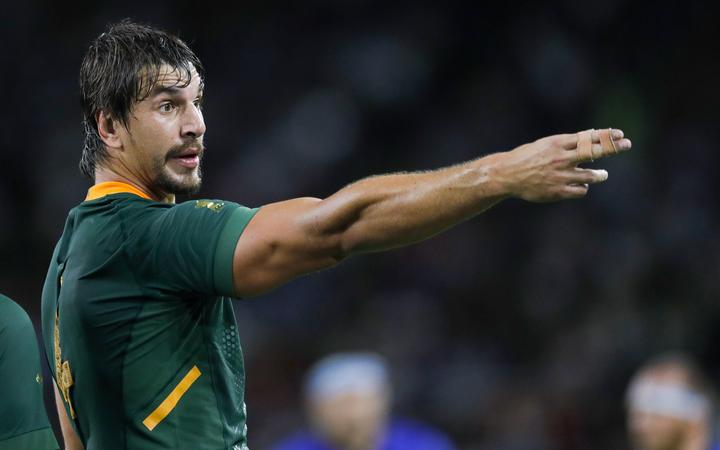 In South Africa, the ghosts of the past stalk coverage of the Rugby World Cup.

In rugby terms, there is the memory of the Brighton Miracle; a miracle for the Japanese and a long nightmare for the Springboks. They were beaten - and beaten well - by Japan at the 2015 Rugby World Cup in a massive upset.

But there are things other than rugby. And in South Africa that so often means the apartheid past and the legacy of racism.

It has stalked this campaign for the Springboks, 25 years after the first multi-racial election officially ended apartheid.

First there has been the story of lock Eben Etzebeth. It is alleged that Etzebeth and other men assaulted, pistol-whipped and racially abused four people after a night's drinking at Die Watergat pub in Langebaan.

"Langebaan residents say Die Watergat is mainly patronised by white people, with the bar across the road mainly frequented by coloured and black people," reported South Africa's Mail and Guardian in a feature on the incident.

It was also claimed that the Springbok used a derogatory term towards Enver Wilsnach - a person of colour.

The South African Human Rights Commission (SAHRC) investigated and decided to take a complaint to the Equality Court.

But yesterday, Etzebeth's lawyers served papers on the Commission arguing that the investigation was deeply flawed, hurried and should be stopped.

It was all made worse when the lead lawyer for the Commission Buang Jones told a public meeting that Etzebeth is "used to getting away with murder" and should be behind bars - before the case was fully investigated. The Commission is now investigating its own legal counsel over what he said.

Etzebeth has always denied the claims. He says it is untrue and unfounded.

"I am and will always strive to be a true ambassador to this beautiful rainbow nation and the sport that I love."

The Mail and Guardian spoke to Wilsnach, himself a former rugby player, and Springbok supporter, but he stands by his version of what happened.

"There are good players on the team. Good players of colour like Cheslin Kolbe and them. Even Etzebeth, he's a good player," he told reporter Lester Kiewit.

"But that word that he used against me, it put me down… When I see that guy [Etzebeth] then the memories come back. I can't watch the Springboks when he's playing."

The headline on the story was telling: Racism stops rugby's try at uniting South Africa.

Even the ANC, South Africa's ruling party, has been split.

The ANC in the Western Cape has called for Etzebeth to be sent home from the Rugby World Cup to face the charges. On the other side, the Minster of Sport Nathi Mthethwa pointed out that Etzebeth is innocent until proven guilty - and therefore should be able to play in Japan.

The whole issue has reawakened discussion on whether rugby in South Africa - and certain players - have really renounced a racist past.

Then with astonishing bad timing came the Mapimpi video. Makazole Mapimpi is a Springbok wing and plays for the Sharks in Super Rugby.

But video surfaced of him after the Italy match, won 49-3 win by the Boks, apparently heading to a join a knot of celebrating players, white Springboks, only to be waved away.

The video exploded on social media.

This is Heart Breaking pic.twitter.com/7HNhuNHUWp

Later, Mapimpi tried to quieten the storm. Speaking in English and then Xhosa, he said that it was a misunderstanding.

The bench nicknamed the "bomb squad" have a special chant. After shaking hands with opposition players he headed to join them just as they began their chant, and turned away.

All of which means the headlines for the Springboks have largely not been about the rugby.

When it is, coverage often centres on the Bok's next opponents the Japanese, the hosts, the giant killers, the inflictors on the Boks of the Brighton Miracle and the country putting on a magic tournament.

As South Africa's Sunday Times pointed out: "An entire country‚ if not the rugby world‚ wants to send the Boks packing." 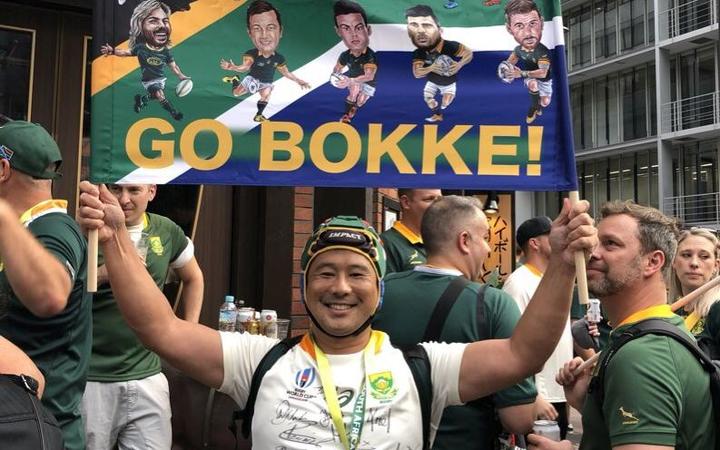 Bok coach Rassie Erasmus is telling everyone who will listen that his team has already exorcised the shock loss to Japan in 2015 by having a friendly just before the Cup, won 41-7 by South Africa.

"In all honesty, the reason for that Japan warm-up game was to erase the Brighton game," Erasmus told reporters in Tokyo.

At a press conference with Tendai 'Beast' Mtawarira next to him‚ Erasmus acknowledged the Japanese fans and hosts.

"You can see Japan is excited about this and rightly so. Their team is doing well.

"We could feel the vibe.

"It is tough not to like Japanese people‚" he said, trying to charm the local media.

The Mail and Guardian argues that anything other than making the final will "be seen as a flop." To do that the Boks have to beat Japan and then the winner of the Wales vs France match.

Many rugby experts in South Africa are betting that will happen.

"The Springboks will end host nation Japan's fairy-tale march through the World Cup thus far in their quarter-final duel, propelling them into a likely semi-final against recent bogey team Wales, who will eliminate France in the interim.

"Meanwhile the All Blacks will repel Ireland to tee up a last-four tussle with England, who should down Australia beforehand."

Even the New Zealand-born former Sharks coach, turned Hurricanes coach and Japan's defence consultant, John Plumtree is picking the Springboks will be too physical for the Japanese.

"The Bok pack is the best at this tournament and if Japan aren't able to handle it on Sunday, they will have a long night. The scrum is a massive weapon for the Boks. They have two excellent front rows and the best locks in the competition."