Opinion - Three down, one to go. No team has been more impressive so far at the Rugby World Cup than New Zealand. 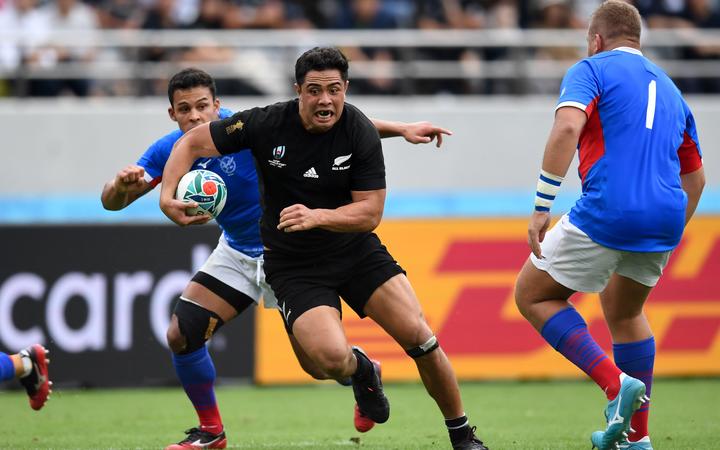 Anton Lienert-Brown runs with the ball during the Japan 2019 Rugby World Cup Pool B match between New Zealand and Namibia. Photo: AFP

Hosts Japan have come closest and we now wait to see if they might meet the All Blacks in the quarterfinals.

We'll get to Pool A later, but first New Zealand's 71-9 Pool B victory over Namibia.

Surely no-one expects more than what New Zealand produced, in their 11 tries to none thrashing.

Namibia were quite good, particularly in the first half. As they were entitled to be. They were never going to win the game, but they are allowed to compete.

This idea that somehow the All Blacks let themselves down by not being 50-0 up within five minutes is just nonsense.

Neither of their playmakers - Richie Mo'unga and Beauden Barrett - were picked to play at Tokyo Stadium, with most of the others backing up from the 63-0 win over Canada four days prior.

Regular readers will know this column isn't exactly an All Blacks' fan zone, but there's absolutely no reason to put the boot into them after this game.

This assignment was a genuine hiding to nothing, in which the best the team could hope for was gametime for lock Brodie Retallick, no injuries and no red cards and/or lengthy suspensions.

In those respects, New Zealand should have no complaints.

It seems safe to assume teams will regularly play a man or two down, as the tournament goes on.

Whether that's for 10-minute bursts - as was the case when props Nepo Laulala and Ofa Tuungafasi were sinbinned against Namibia - or the remainder of the match is the only bit that's up in the air.

The bottom line is referees are being encouraged to brandish cards and, as long as they're relatively consistent about it, there won't be a problem.

World Rugby has to protect the head of players and if you make contact with it, as Tuungafasi and Laulala did, then you deserve to take a seat.

Everyone recognises that and it's partly why the All Blacks played the last few minutes of their pre-world cup clash with Tonga a man down. No doubt they'll be regularly doing the same at training. 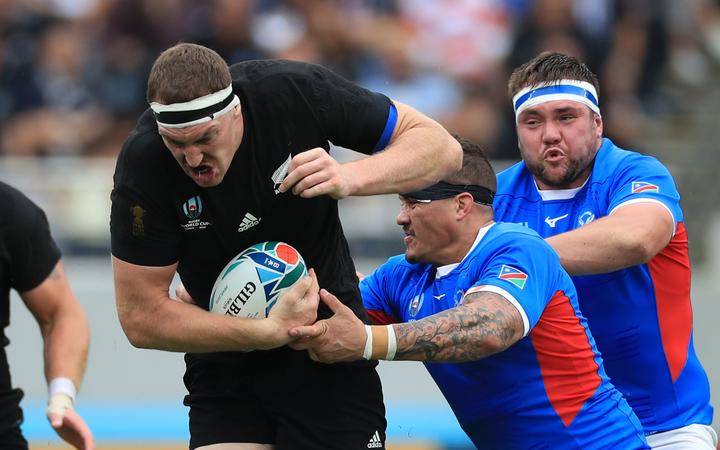 Brodie Retallick returned to the rugby field after he dislocated his shoulder against South Africa in the Rugby Championship. Photo: AFP

In the Namibian case, the process was good. Referee Pascal Gauzere saw the hits by the All Blacks' props and asked for them to be reviewed.

Clearly there was contact with the head but, because both ball-carriers were low and falling lower, he felt yellow cards were sufficient.

Again, people will wear that. They might not love it, but they can understand and accept the sequence of events.

What's less palatable is when no-one sees an infringement, but a Television Match Official opts to intervene a minute or two down the track.

That smacks of a peripheral figure actively looking for ways to change the course of events and that won't wash with anyone.

Anyone else think Cane took a knock against Namibia?

The openside flanker appeared to stumble out to the wing, after being involved in a tackle during the first half of the game in Tokyo.

He stayed put out there until Laulala was sinbinned and was then the player substituted when Angus Ta'avao had to come on to contest a scrum.

Ta'avao ended up replacing Laulala permanently, with Cane returning once the 10 minutes had expired.

Coincidence or not, Cane didn't go on to produce the finest performance of his All Blacks' career.

So where are the team at?

They're travelling pretty well, you'd have to say.

Sterner tests await, but the Mo'unga and Beauden Barrett thing is showing signs of progress. The midfield backs are all firing and Sevu Reece and George Bridge continue to impress on the wings.

There's room to improve up front, which might make life easier for Aaron Smith and TJ Perenara at halfback. Neither have been amazing so far and, if any halfback's caught the eye, it's probably third-stringer Brad Weber.

The Richie Mo'unga-Beauden Barrett combination is starting to take shape, according to Hamish Bidwell. Photo: Photosport

Scott Barrett's going to make himself hard to leave out of the first XV, with blindside flanker maybe an option now Retallick's back.

You could also argue Jordie Barrett showed enough control against Namibia to suggest he could supplant Ben Smith as the team's main outside back reserve.

You still think a big side, who can dictate a slow tempo, will eventually trouble or beat the All Blacks. But as long as games are played at pace, then there doesn't appear to be a side with the skill and athleticism to match them.

Are we about to see how New Zealand might go against a bruising and pedestrian foe?

At this rate Japan are a good chance to beat Scotland handily, in the final round-robin match of the tournament, and top Pool A. That would likely mean Ireland are the All Blacks' quarterfinal opponent.

It's still all up for grabs in Pool A, where third-placed Scotland are yet to play Russia and Japan. Ireland meet Samoa in the remaining game, which looms as pretty winnable.

Assuming Scotland get a bonus-point win against Russia on Wednesday, then all eyes will turn to Sunday's clash with Japan in Yokohama.

Ireland look assured of going through, with Japan and Scotland playing for the right to join them.