Italy's forwards bludgeoned Canada into submission and restored some order to the Rugby World Cup by scoring seven tries in a 48-7 victory in energy-sapping humidity at Fukuoka Hakatanomori Stadium on Thursday, catapulting them to the top of Pool B. 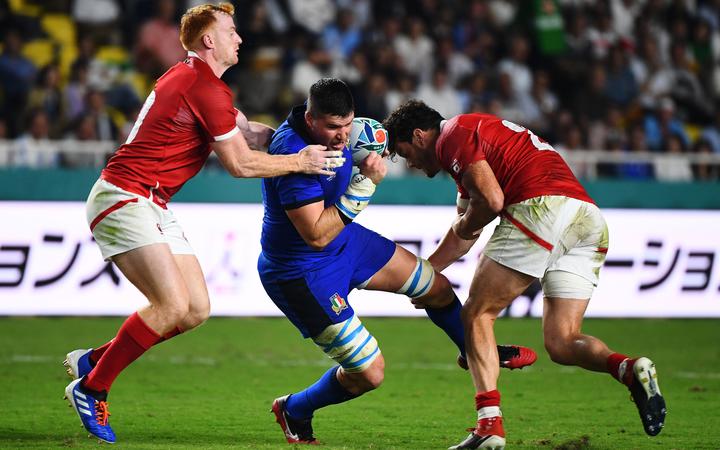 It was the second successive bonus-point victory for Conor O'Shea's side after a 47-22 win over Namibia last Sunday and all but assured them of third place in a pool that includes heavyweights New Zealand and South Africa.

They have 10 points but still need to face the All Blacks and Springboks and would need an upset of the magnitude of Wednesday's win for Uruguay over Fiji in Kamaishi to sneak into the quarter-finals.

The Italians, who rested several players, were in no mood to allow a second shock within the space of 24 hours and were led by rampaging loose forwards Jake Polledri, Braam Steyn and Sebastian Negri.

For the first 15 minutes they demonstrated that the gulf between tier-one and tier-two nations was still in existence, with Steyn and Budd exploiting some poor defence to give their side a 17-0 lead by the 13th minute.

Facing a rout, the North Americans started to make their tackles and began to get some possession which allowed them to dominate field position.

They also had three gilt-edged opportunities to get back into the game, the most prominent when captain Tyler Ardron burst through and passed to replacement flanker Matt Heaton who dropped the ball with the line open.

Winger DTH van der Merwe also got more involved and created space down the left, but when the Canadians wasted a three-on-one chance the momentum swung back to the Italians and they went into halftime with a 17-0 advantage.

Negri extended the lead when he also smashed over from close range before Canada again failed to capitalise on an opportunity when van der Merwe created space through the midfield and managed to put Jeff Hassler clear only for Matteo Minozzi to produce a try-saving tackle on the winger less than five metres from the line.

Referee Nigel Owens then awarded a penalty try that secured the bonus point for the Italians before replacement winger Mattia Bellini also crossed with about 20 minutes remaining.

Owens created some controversy when he awarded Ardron a try only for the television match official Rowan Kitt to rule it out for a knock-on before the ball landed in the number eight's hands.

The decision was met by a chorus of boos but the crowd, now firmly behind the Canadians, rose to their feet minutes later when the underdogs scored the best try of the match with a superb finish by winger Andrew Coe.

Italy, however, finished strongly, with replacement hooker Federico Zani shunted over from a driving maul before Bellini put Minozzi in to close out the scoring. "You have to be pretty happy," said O'Shea.

"We started the game really well and that's where we imposed ourselves ... and in the last 20 minutes drove it home the physical dominance we had."