First Person - The assignment was essentially a simple one. 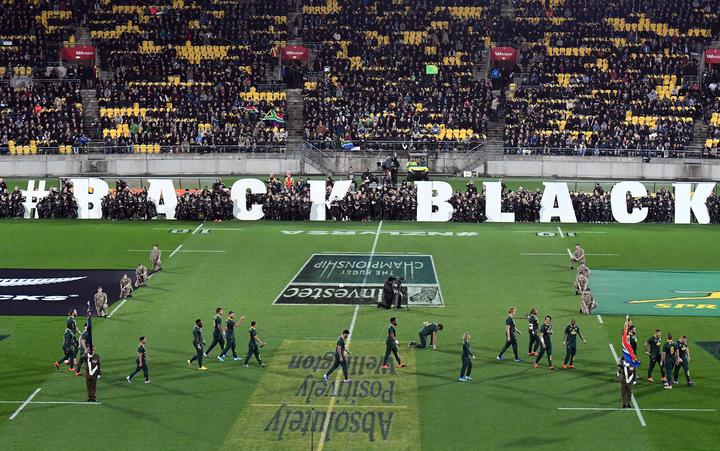 Hamish Bidwell had the responsibility of holding up the far right K in the #BACKBLACK promotion at Westpac Stadium on Saturday night. Photo: Photosport

Having, by chance, been selected to participate in the pre-match entertainment for last Saturday's All Blacks vs Springboks Test at Westpac Stadium, the task had been to write about it.

Not many people get on the park during Rugby Championship matches and here were a group of us - junior players and parents from a local rugby club - who were going to be out there when the teams ran on to sing their respective national anthems.

But to tell the story of Saturday night, it's essential to go back to Saturday morning and an announcement which was to have quite a significant bearing on later events.

New Zealand Rugby had wanted to mass some fans together on the field. We weren't sure to do what. All we'd been told was our club had been asked to participate and to indicate if our child was interested.

Parents needed to pitch in too, for what we assumed would be some kind of interpretive dance, which told the story of All Blacks rugby, or your basic synchronised flag waving.

The reality was more Krypton Factor, as we learned the children were more ornamental, and that the point of the exercise was for mums and dads to assemble a collection of shapes that were designed to read #BACKBLACK.

Thursday night's rehearsal was a shambles, as bored kids wondered aloud when we were going home, while parents tried (mostly in vain) to differentiate your As from your Ks and then hold them the right way up and facing the proper direction. I somehow ended up as one of three people allocated the second K.

Anyway, so far, so good.

It was Saturday morning when things changed. That was when the announcement came that parents could bring alcohol.

Keep it discreet. Just a few quiets in a backpack. But, yes, alcohol would be allowed on both the bus ride down and at the match.

And fair enough, too. We were to be housed in the Cricket Wellington practice nets, beneath Westpac Stadium, from 5pm to 10pm. We'd emerge, through two tunnels, to hold up our hashtag, but the rest of the night would be spent in the bowels of the stadium.

Snacks and a big screen would be provided, but we would be staying put. In the circumstances, the odd beer or RTD didn't sound excessive.

Five minutes from the ground we were told the plan had changed. There was to be no grog.

Later, after being met on the Fran Wilde Walkway, we were told to consume what we could as quickly as we could and then report for a bag search.

I remember bits of the night from there. Like lining up in the wrong tunnel.

Those of us who were holding BLACK were meant to go right, but I'd turned left with the BACKs. Never mind, I wandered off down the touchline and found the right K eventually.

Other than that, I can say my arms grew a bit weary. Handles had been attached to the shapes between Thursday and Saturday and a few of us had been issued with special gloves too. They definitely helped, but backing black was a lot harder than it had been in the rehearsal.

We'd expected a great surge of adrenalin and national pride, but even the kids were pretty muted. Watching on TV the next day, the hashtag didn't look like it had made much visual impact either.

There's probably more I could add about the evening, but that would only be incriminating.

Suffice to say, Saturday definitely goes down as a once in a lifetime experience.