All Blacks coach Steve Hansen has expressed his disappointment at the amount of errors his side have committed in their Rugby Championship matches but is confident they will be back to their best when they get to the World Cup in Japan. 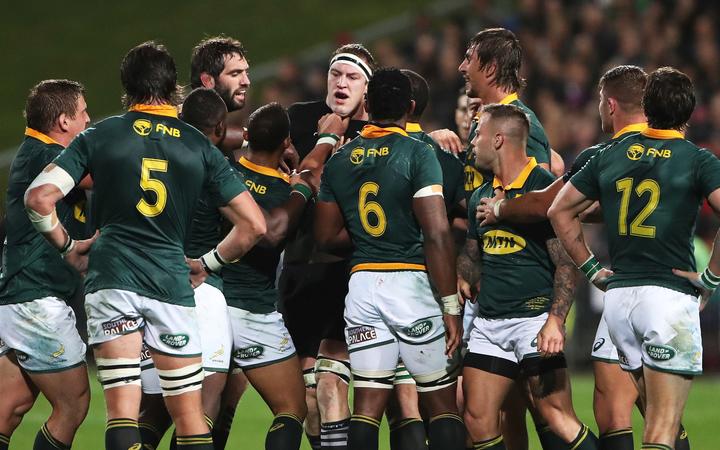 All Blacks held to 16-all draw by Springboks. Photo: Photosport

Hansen's side drew 16-16 with South Africa in Wellington on Saturday after replacement halfback Herschel Jantjies scored a try in the final minute of play, following an error by his opposite Aaron Smith.

The All Blacks had struggled to beat Argentina 20-16 last week in Buenos Aires and the clash with the Springboks was seen as an early indicator of where both sides were ahead of their World Cup opener on 21 September.

"If you look at history, our June series we are always rusty," Hansen said of the performance that was blighted by numerous handling errors and timing issues.

"We're reasonably happy, not so much with the performance but with what we are seeing and where we can go. That's the important thing.

"Whilst a lot of people won't be happy with our mistakes, we aren't either but we also are seeing enough things in our game to get quietly excited."

There were signs in the second half of the match the All Blacks were able to find space out wide against an aggressive and fast Springboks defensive line and they also made numerous line breaks up the middle of the field.

Springboks coach Rassie Erasmus, who like Hansen is using the Rugby Championship to fine tune his selections and trial tactics, said his side had been lucky to snatch the draw but also felt there was still plenty of improvement in them.

"There are a lot of things we tried. Whilst we put out a very good team we were experimenting a little bit and you do lose a bit of rhythm when you do that.

"At one stage We did look a little one dimensional on attack but I guess that was the result of trying to win the match, while building towards the World Cup."