Analysis - In a week of games that went down to the wire - starting with the Cricket World Cup final and ending with the All Blacks' 20-16 win at Estadio Jose Amalfitani this morning - New Zealand's sporting nerves have been severely tested. 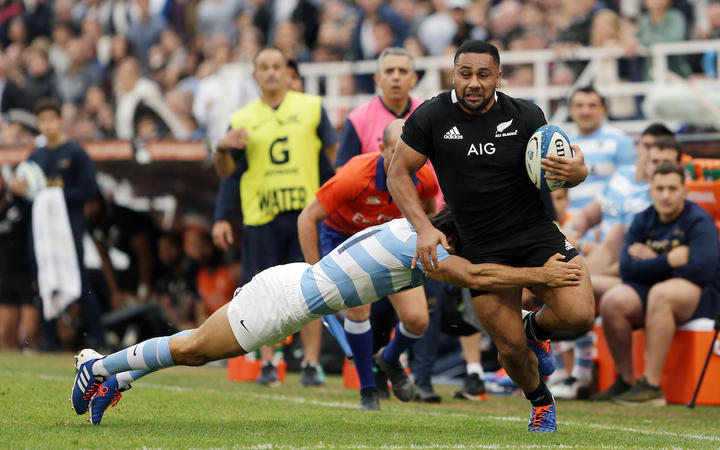 Ngani Laumape is tackled by Ramiro Moyano from Argentina during the Rugby Championship. Photo: Photosport

Chuck in two pulsating Silver Ferns' wins and two golden point Warriors' games (one drawn, one won), and it's fair to say everyone would've probably preferred a nice, old fashioned comfortable All Blacks' win to bring back a bit of normality.

Actually, being in the stadium did nothing for my nerves, as the crowd and noise they created made the hair stand on the back of my neck as the Argentine faithful belted out an elongated version of the national anthem pre game.

The stadium sits about half an hour away from the centre of the city, where things look an awful lot different to the classical Spanish architecture and grand statues of the libertadores that give off such an impressive air.

The fences that surrounded the field are topped with barbed wire, then there's a dry moat to contend with for any would-be pitch invaders. Oh, and there are police armed with shotguns that accompany the All Blacks wherever they go.

There was plenty of hope that filed into the gates, chanting and singing as they took their places on the terraces. The concrete bleachers thankfully had a lick of paint applied since I was last here two years ago, but the 77-year-old stadium still very much had an Athletic Park feel to it (thankfully without the wind).

Alcohol is banned inside, so every now and then the dank smell of marijuana reminded us that people were finding other ways to enhance their test rugby experience. In fact, it was pretty common to find yourself walking behind someone smoking a joint out on the city streets during the week.

The media area is one part that could do with a rebuild as we were crammed three to a table out in the open air. Plenty of dubiously accredited folks managed to find their way in as well, meaning that it was standing room only at the back and blocked aisles throughout the game. It was essentially an extension of the crowd, with pretty much all of the 50 or so in the area on their feet when Emiliano Boffelli scored his try.

It was an eerie feeling as the Pumas strode confidently to the final lineout to attempt their shot at what would've been the most glorious day in the team's history. Ultimately, they came only so close - three metres, to be precise.

The reaction around me wasn't one that I was expecting from the rabid fans, though. Instead of outrage, it was a sad resignation that they will continue to be a side that has never beaten the All Blacks and may well have to wait a long time before they get another chance this good.

Steve Hansen looked pleased as he sat in the cramped post-match conference area. This was a test not just in name but for a team with players that had a chance to prove something - and did.

If that's the way every game in the Rugby World Cup goes, no one is going to be complaining when they come home with the prize.