Black Caps captain Kane Williamson says the overthrow rule should not change after a deflection off England batsman Ben Stoke's bat inadvertently led to six runs off the third ball in the final over of the Cricket World Cup final. 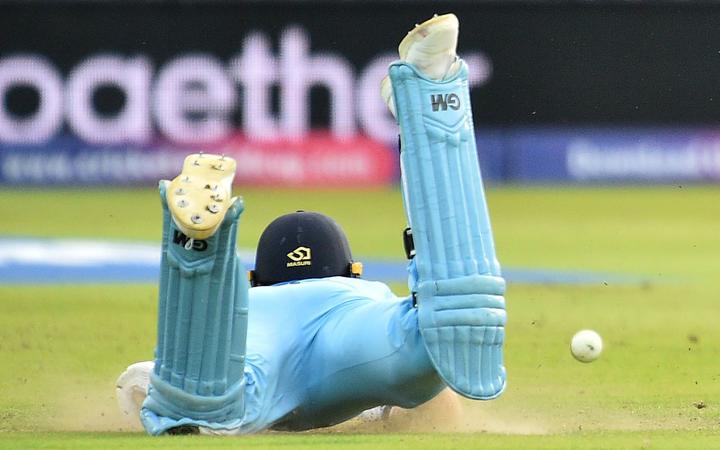 The ball hits England's Ben Stokes, deflecting to reach the boundary as he dives to make his ground during the 2019 Cricket World Cup final. Photo: AFP

Needing nine to win off the last three balls of the match, Stokes played a shot out to the boundary at midwicket that was picked up and thrown in by Martin Guptill as the English batsman scurried back for a second run off the delivery.

As Stokes dived for the line, the ball deflected off his bat, sending it to the boundary at third man as a helpless Ross Taylor chased after it.

Stokes was eventually awarded six runs off the ball by the umpires, cutting England's chase to just three off two.

However, according to law 19.8 - Overthrow or wilful act of fielder - of One Day International Cricket rules on the ICC's website, there is a strong argument that the second run that Ben Stokes attempted to get off the delivery should not have counted.

This is the wording of the law: "If the boundary results from an overthrow or from the wilful act of a fielder, the runs scored shall be any runs for penalties awarded to either side, and the allowance for the boundary, and the runs completed by the batsmen, together with the run in progress if they had already crossed at the instant of the throw or act."

Replays of the ball show that when Guptill threw the delivery in from the boundary, Stokes and his partner Abdul Rashid had not crossed over for the second run when running down the pitch, nor had he reached the crease at the striker's end when the ball deflected off his bat, meaning that according to the law, England should have been awarded five runs, not six.

There are no set guidelines around when exactly the 'act' (throw) is deemed to have occured - whether it's the moment Guptill releases the ball or the moment it hits the bat of Stokes.

Williamson said after the match that whatever ambilivence there is around the overthrow rule, it shouldn't be changed based on that moment.

"You can't sort of look at that and think that perhaps that decided the match.

"There were so many other bits and pieces to that game that were so important. When it comes down to a tie, you start looking at every single delivery, don't you? It was a pretty tough pill to swallow that when, yeah, when we were looking pretty likely with Trent bowling really, really well, so one of those things," Williamson said.

On pure competence & quality of play, #NZ deserved 2win but luck favoured #ENG Turning point is 4 runs yielded in overthrow, towards end, which put #ENG back in reckoning#NZ are the true winners #NZvsENG#ICCWorldCup2019final#ICC change the rules, it's not fielding team error pic.twitter.com/jU0WoO46Ei

England captain Eoin Morgan said he was just as confused about the situation as the Black Caps were.

"I wasn't quite sure what had happened to start with because, obviously, he dived and there was dust everywhere and the ball deflected through and all the Blackcaps standing around going 'What's going on?' So I was trying to figure out, did he hit it, did the keeper hit it?

"I was trying to stay in the moment. I wasn't celebrating. It is not something you celebrate or cheer, well I don't because that could be us on the other side of it, and there's margins like that today that we spoke about," Morgan said.

England went on to the win the tournament after the scores finished tied both in regular play (241) and in the super over (15). England won because the team hit more boundaries than New Zealand in the match.