An exhilarating match between the Black Caps and England had sports fans all over the world on the edge of their seats. Here are the key moments that drove the Cricket World Cup final to reach a Super Over. 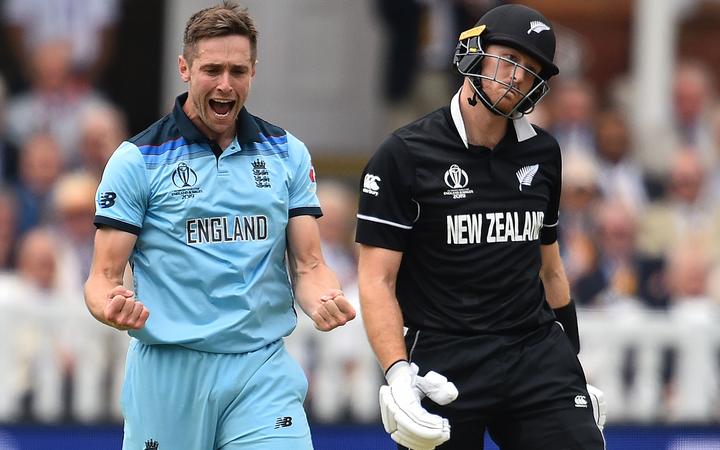 Just as Martin Guptill started to look like he had found some form in this tournament, he was given out LBW on 19 off the bowling of Chris Woakes.

Guptill seemed to be content with the call but after deliberating with Henry Nicholls he decided to review and was clearly out.

With New Zealand's review used up, when Ross Taylor was given out later in the innings for LBW on 15, he couldn't review it.

Replays then showed the ball missing the top of the stumps by at least a few inches. 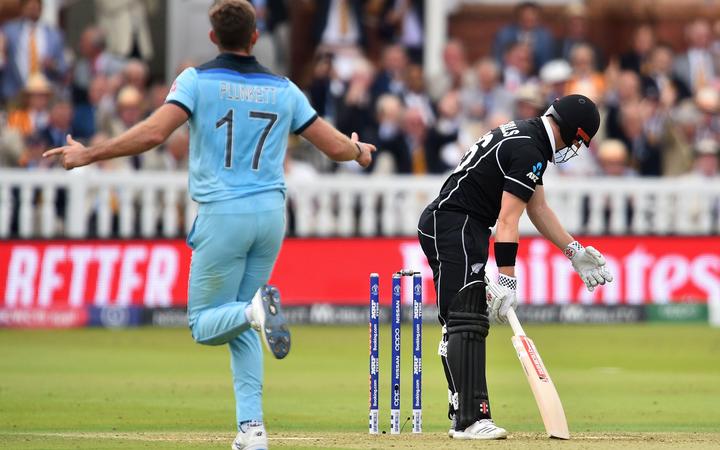 Right arm seam bowler Liam Plunkett has been a bit of a journeyman for England over the years.

The 33-year-old has been in and out of the England side for 14 years, playing in the 2007 World Cup and then called up three tournaments later in 2019.

Coming in as England's third bowler, Plunkett set the standard for the hosts, taking three wickets for 42 runs off his 10 over spell.

For a man in and out of his national side, Plunkett showed great composure in his spell at Lord's.

3. Jason Roy not out first ball 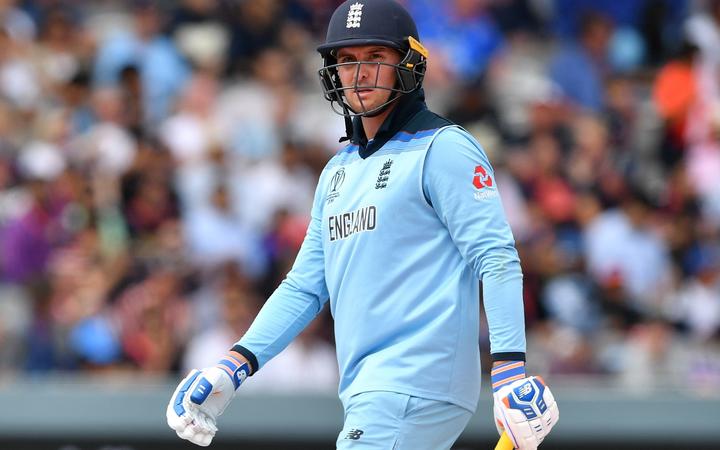 Jason Roy walks back to the pavilion after losing his wicket for 17 runs. Photo: AFP

Needing a fast start, New Zealand called on Trent Boult to make an early breakthrough, as he has throughout the tournament.

In his first delivery of England's innings, Boult bowled a good line and length ball that trapped Roy on his crease.

Boult and the Black Caps went up for an appeal for LBW, but umpire Marais Erasmus gave Roy not out.

New Zealand reviewed the decision and the Decision Review System showed the ball pitching in line and hitting leg stump, however, because only about 48 percent of the ball was hitting the stumps, the umpire's original call stood.

If Erasmus had given that out in his original decision, the pressure would've had well and truly been on England. 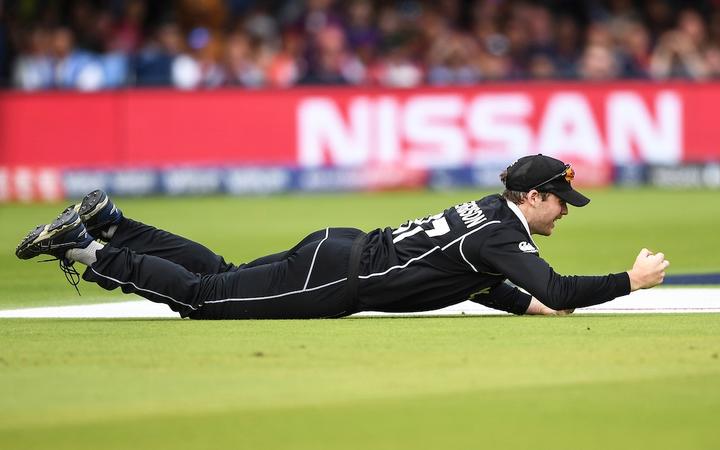 After getting England's danger man Joe Root out cheaply for seven and Jonny Bairstow for 36, the pressure was on captain Eoin Morgan to help anchor his side's innings.

However, a short and wide ball from Jimmy Neesham proved too good of an opportunity for Morgan to pass up and he slashed at it over point.

As soon as he hit it though he knew it was heading in Lockie Ferguson's direction at on the boundary at point.

Ferguson came running in to take a screamer of a catch, diving forward just to get his hand's under the ball, sending Morgan back to the sheds with just nine to his name and putting England in real trouble at 86/4. 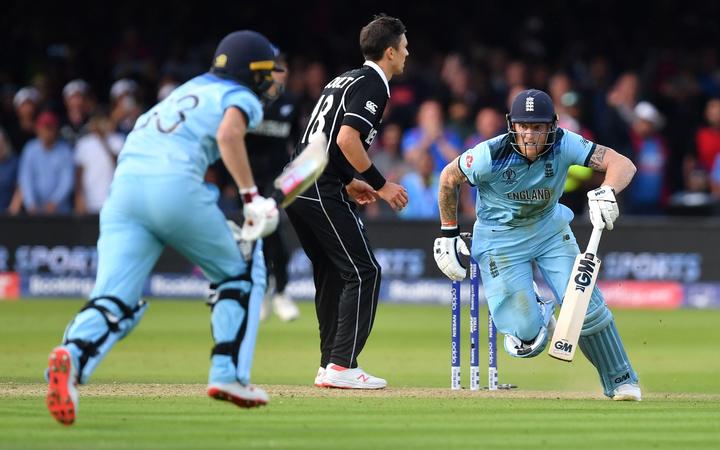 With Morgan going, and the required run rate creeping up early, Ben Stokes and Jos Buttler were forced into a rebuilding phase just 23 overs into the match.

Both men played perhaps the innings of their lives, each reaching 50 as well as producing a 100-run partnership that got England's title hopes back on track.

When Buttler was caught by reserve fielder Tim Southee on the boundary at point on 59, it appeared the match had swung back in New Zealand's favour, but Ben Stokes managed to carry his bat right until the last ball of the innings, tying the match and sending it to a super over.

Needing 15 from the last over, Stokes took it upon himself to get England its first World Cup title.

There was a moment of luck for Stokes in the final over when Martin Guptill threw the ball in from the boundary at cover, trying to stop a second run, only to deflect off Stokes' bat as he dived for the line and run away to the boundary for six runs.

Also worth mentioning, Trent Boult caught Ben Stokes on the boundary in the penultimate over only to step on the rope not realising how close he was to it.

Stokes ended the match with the highest score of the day - 84 not out. 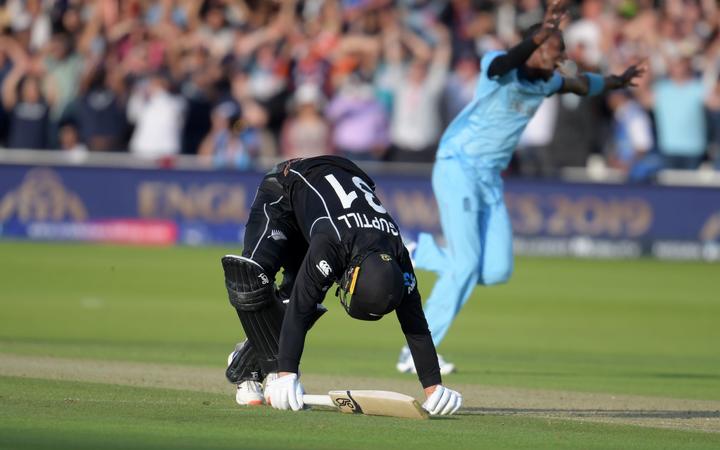 In the Super Over, England sent Ben Stokes and Jos Buttler in to face the six ball, getting off to a good start with a three-over gully, followed by two boundaries, two singles and a two, giving England a total of 15.

For New Zealand to win, they needed 16 runs, tie and England win after hitting more boundaries in their regular innings.

The Black Caps sent out Martin Guptill and Jimmy Neesham to face their six balls against Jofra Archer.

The over started with a wide, a two and then a six to Neesham, reducing the target to just seven off four balls.

Neesham then got two twos and a single, meaning Guptill needed to get at least two off the last ball to win.

Archer bowled a full delivery to Guptill who played it out to midwicket, the fielder on the boundary threw it in to cut off the two and Buttler managed to stump Guptill about half a metre short for the second, giving England it's first world cup win.