South Africa's hopes of a semi-final place at the Cricket World Cup appear to have been washed out along with their fixture against the West Indies at the Rose Bowl. 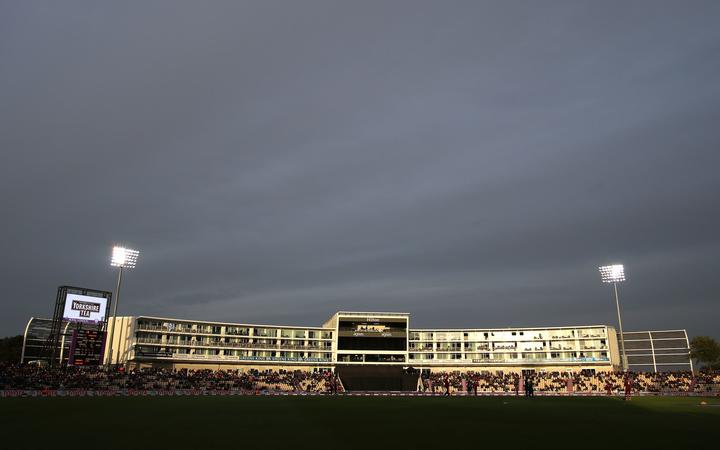 Dark clouds hang over the Rose Bowl during the Cricket World Cup fixture between South Africa and the West Indies. Photo: PHOTOSPORT

The 'no result' has given them a first point of the competition from four matches, but they likely needed double that in order to compete for the knockout phase. West Indies now have three points from three games.

With more bad weather predicted for this week across England and Wales, this might not be the only game lost though.

After being sent in to bat under heavy skies, South Africa laboured to 29 for two from 7.3 overs before persistent rain throughout the day ensured there would be no more play.

Seamer Sheldon Cottrell (2-18 in 4 overs) removed Hashim Amla (6) and Aiden Markram (5), both edged behind the wicket, but opener Quinton de Kock (17 not out) looked in good touch before the rain came.

It is more bad luck for the South Africans, who have endured injuries to key bowlers Dale Steyn and Lungi Ngidi, and lost their opening three matches to England, Bangladesh and India.

"These are the worst," South Africa captain Faf du Plessis said. "Both teams wanted to play and get results but you can't control the weather."

He added they will be bolstered by the return of seamer Ngidi in their next fixture against Afghanistan in Cardiff on Saturday.

"Lungi will be ready for the next match and it will be good to have him back. We haven't played our best cricket so far and we've got to beat Afghanistan," Du Plessis said.

Rain had been predicted in Southampton, with the match the second of the tournament to be washed out after Sri Lanka versus Pakistan was abandoned without a ball being bowled in Bristol.

West Indies captain Jason Holder was left to rue what might have been after his side's clinical start.

"Yeah, it was a really good start again by the bowlers, it's unfortunate the weather came," Holder said.

"So far we've been getting new ball wickets. It's just a matter for our bowlers to hit the straps and continue doing what we're doing.

"We would have probably been happy with that (three points from three games) at the start of the tournament."

Holder added they hoped to have all-rounder Andre Russell back from injury for their next clash against England at the same Southampton venue on Friday.