England captain Eoin Morgan said Jason Roy was a "luxury" after the opener's latest big hundred helped England thrash Bangladesh by 106 runs as the hosts got their World Cup campaign back on course. 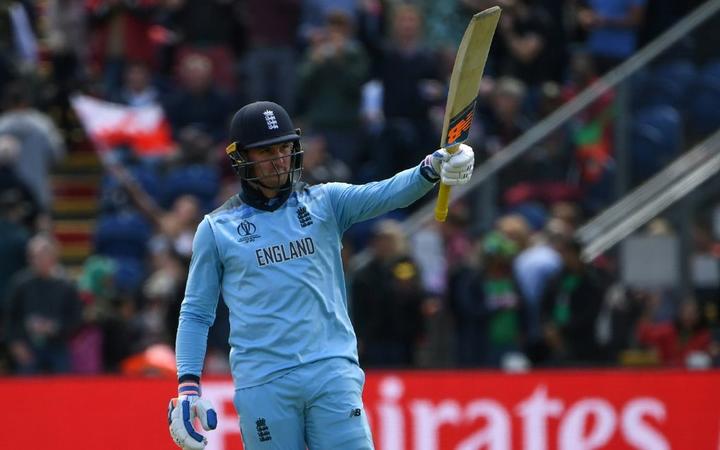 Roy's 153 - his third one-day international score of 150 or more in nine hundreds - took England to an imposing 386 for six in Cardiff on Saturday.

It was just the start the World Cup favourites, top of the one-day international rankings, needed after a surprise 14-run loss to Pakistan last time out.

"It's a luxury," said Morgan after England made it two wins from three ahead of their match against the West Indies in Southampton on Friday.

"People in general, talk about scoring hundreds. He's an exception to the rule.

"He just goes on and get big scores. The rate he can get them at is so difficult to defend.

"He scores all the way around the ground, he takes really good bowlers down, he hits good balls for boundaries. He's great to have in the side.

"One of his biggest strengths at the moment is his temperament, compared to the start of his international cricket to right now, I think there is a considerable difference."

Roy has yet to play in a Test match but Morgan insisted: "I've said this before: I do think he could play Test cricket at some stage.

"I think he has every attribute to be a Test cricketer."

Meanwhile, Jonny Bairstow, who helped Roy put on a rapid 128 for the first wicket after England were sent into bat at Sophia Gardens, said: "Having opened the batting now for a long period of time for England, his confidence will be very high.

"It's great for him to score 150 in the World Cup and you are hoping we can both kick on from that start today, be that a chase or setting, in one of the huge games we've got coming up," added Bairstow, who made 51.

The only worry for England following a dominant display was a hip injury suffered by Jos Buttler when hitting a six during a typically dashing 64.

Buttler did not keep wicket, with Test gloveman Bairstow behind the stumps instead.

"He is going to be monitored over the next 48 hours, but at the moment it's more precautionary rather than not being able to do his job," said Morgan.

"I am quite confident that it's not a serious injury."

Bangladesh, who knocked England out of the 2015 World Cup, were never in the hunt despite a century from star all-rounder Shakib Al Hasan, with the pace of England quicks Jofra Archer (3-29) and Mark Wood too hot to handle as the Tigers slumped to 280 all out.

"Probably the slow nature of the pitch made it more difficult to play," said Morgan of the two fast bowlers.

"Shorter balls didn't fly through. On a quick-natured pitch it's easier to play or get out the way of.

"It follows you when it's slower, so today it was ideal."