New Zealand survived a late scare to beat Bangladesh by two wickets in their Cricket World Cup pool match at the Oval in London.

Look back at how the match unfolded with RNZ's live coverage here.

Chasing a modest target of 245, Ross Taylor and Kane Williamson shared a third-wicket partnership of 105 to put the Black Caps on course for a comfortable victory, but they lost six more wickets before notching up their second win of the tournament with 17 balls to spare.

Williamson should have been run out for eight but Bangladesh wicketkeeper Mushfiqur Rahim dislodged the bails with his arm to waste the chance and the New Zealand captain went on to make 40.

When Matt Henry was eighth man out, New Zealand still needed seven runs for victory but Mitchell Santner stayed calm to secure their second win of the tournament with 17 balls to spare.

"It's very nice to get across the line. We still knew that 250 could be quite challenging," Williamson said.

"It wasn't our most clinical effort with the bat. There were a few soft dismissals that we'd want to address. But it's a great experience to have in tournament cricket."

New Zealand bowled tightly and fielded with high intensity after winning the toss to restrict Bangladesh to 244 all out.

Tamim Iqbal and Soumya Sarkar shared an opening partnership of 45 before Sarkar was bowled by Henry for 25 and Tamim, on 24, skied a simple catch to mid-wicket.

Shakib Al Hasan and Mushfiqur Rahim added 50 for the third wicket but the stand ended when Mushfiqur was run out for 19 following a mix-up.

Shakib reached his fifty off 54 balls before, on 64, he edged medium-pacer Colin de Grandhomme to wicketkeeper Tom Latham and Mohammad Mithun went for 26.

Needing to accelerate to get close to 300, a par score on the usual batting-friendly Oval wicket, Bangladesh boundaries were in short supply. 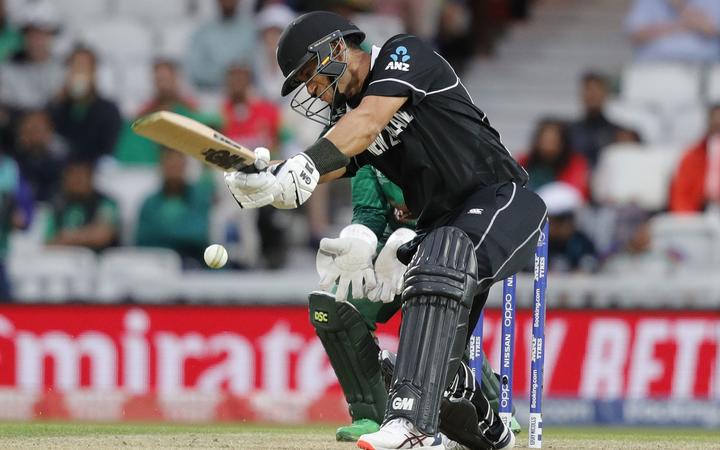 Mohammad Saifuddin struck the only six of the innings in the 45th over but it was a rare joyful moment for the boisterous Bangladesh fans and Henry bowled him for 29 in the final over to claim his fourth wicket and end the innings.

New Zealand started their chase confidently as Martin Guptill made a breezy 25 and Colin Munro 24 to move them rapidly on to 55-2.

Williamson should have been dismissed for eight, but wicketkeeper Mushfiqur dislodged the bails with his arm to waste the opportunity.

Williamson and Taylor added 105 to put New Zealand in a dominant position before Williamson was caught at deep mid-wicket by Mosaddek Hossain off Mehedi Hasan.

Latham fell for nought and when Taylor was caught down the leg-side New Zealand nerves were jangling.

The target was still comfortably within range, but De Grandhomme (15) and Jimmy Neesham (25) also fell as the tension mounted.

Henry was bowled by Saufuddin with seven required but Santner drove the first ball of the 48th over to the extra cover boundary to get New Zealand over the line.

Bangladesh captain Mashrafe Mortaza, who led his team to an upset win over South Africa in their first match of the tournament, said they were 20-30 runs short with the bat.

"It was a good wicket. The outfield was slow," Mortaza said. "We got set and then got out too often, we couldn't make a good partnership in the middle.

"At the end it was a tight match. They closed it professionally - credit to them."