Analysis - "Football, bloody hell," may be one of the most trite quotes in the sport, but none could better describe the logic-defying excitement of the past two mornings. 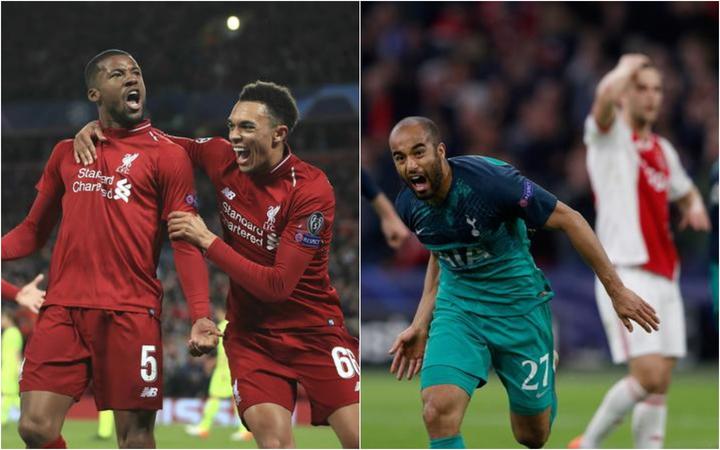 Both Liverpool and Tottenham pulled off unlikely victories to reach the 2019 Champions League final in Madrid. Photo: AFP

Yesterday, in the semi-final of the same competition, Liverpool overturned a 3-0 first-leg deficit to render the travel plans of thousands of Barcelona fans obsolete. And today, in equally astounding, yet somehow more dramatic fashion, London-based Tottenham Hotspur completed their own three-goal comeback.

They have a goal kick. There are seconds left. Their Dutch opponents, Ajax, have a foot, leg, arm, torso and all but a wisp of hair in the final. The biggest moments seemed to have passed Spurs by.

The ball is lumped forward. Striker Fernando Llorente edges it into the feet of teammate and Dele Alli, who, on the cusp of Ajax's penalty area, turns it into the path of forward Lucas Moura. "They won't get another chance," the commentator inhales.

With his first touch, Moura swings across his body and neatly slots the ball in the far corner.

Ajax's players collapse. Their fans, who have sung relentlessly for so long, go silent. The Spurs bench empties. Their manager, usually brick-faced, is in tears. Ajax's goalkeeper lies quietly on his back staring emptily into Amsterdam's night sky. Others bury their face in the grass and wipe away their own tears.

On 1 June, Liverpool and Spurs will meet in Europe's ultimate match - the first all-English showdown since Sir Alex's United faced Chelsea in 2008.

Both came back from the dead. Game of Thrones' Red Priestess and resurrection pro, Melisandre, must have been casting spells in the crowds.

Last week, Spurs lost 1-0 at home to Ajax in their first meeting. This morning, the superior Ajax led 2-0 at half-time. Spurs needed three in 45 minutes.

Spurs had never reached a Champions League final. Only one other team had made it after losing the first-leg of a semi-final at home.

Lucas Moura scored his first, 10 minutes after the break, via a searing counter-attack, and doubled his tally moments later after an almighty goalmouth scramble.

For the final half hour, Spurs battered their opposition, hitting the post and drawing excellent saves from keeper, Andre Onana. Yet in pouring men forward, they looked vulnerable, and Ajax too struck the woodwork late on.

"Still difficult to talk," he breathed. "The emotion is amazing, thank you to football."