Liverpool delivered the greatest in a long line of famous comebacks to reach the Champions League final, beating Lionel Messi's Barcelona 4-0 at Anfield to overturn a three-goal deficit from the first leg. 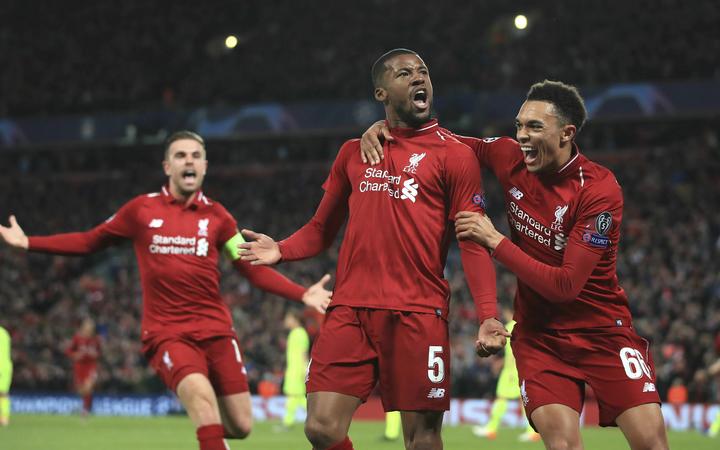 Divock Origi scored twice, either side of goals by halftime substitute Georginio Wijnaldum early in the second half, to send Liverpool into its second straight final and set up a meeting with either Ajax or Tottenham on 1 June.

It was only the third time in the history of the European Cup that a team came from three goals down after the first leg of a semifinal and progressed to the final, after Panathinaikos in 1970-71 and Barcelona in 1985-86. No team had done it in the Champions League era.

The comeback was all the more unlikely given that Liverpool was without two of its first-choice forward line, Mohamed Salah and Roberto Firmino.

Instead, it was Origi - the scorer of the crucial fourth goal in the 79th minute - who made the seemingly impossible, possible. And it needed some remarkable ingenuity from Trent Alexander-Arnold, who pretended to walk away from taking a corner before quickly spinning round and sending in a low cross as Barcelona's players dawdled. Origi swept in the finish.

Given the opposition, a team featuring arguably the greatest ever soccer player in Messi, this will likely rank as Liverpool's greatest European performance, rivaling the comeback from three goals down against AC Milan in the 2005 Champions League final.

There was also the 3-1 win over Saint-Etienne in the 1977 European Cup and the 4-3 win from 2-0 down against Borussia Dortmund in the 2016 Europa League quarterfinals.

For Barcelona, it was the second year in a row that it let a three-goal lead slip, having beaten Roma 4-1 at home in the quarterfinals in 2018 before losing the return leg 3-0 to go out.

Liverpool manager Juergen Klopp had delivered a stirring speech on the eve of the game, telling his players to "fail in a beautiful way" if they were to get eliminated.

They took that to heart.

Salah, Liverpool's top scorer who missed the game as he followed protocols after a concussion, entered the stadium before kickoff wearing a T-shit bearing the message: "Never Give Up."

Then teammate Andrew Robertson set the tone on the field, pushing Messi's head with two hands while the Barcelona forward was on the ground after an early challenge. Fabinho followed that up with a crunching tackle on Luis Suarez, who was jeered relentlessly by Liverpool fans at the ground he graced for 3½ years.

A goal was needed to really give a shaken Barca team the jitters and it arrived after seven minutes, with Origi tapping into an empty net after goalkeeper Marc-Andre ter Stegen could only parry out a shot by Jordan Henderson. 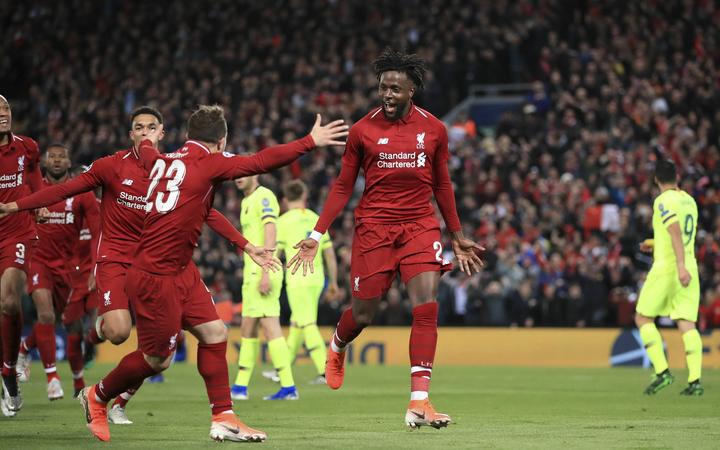 Barcelona already looked rattled, with Suarez living up to his role as the player opposition fans love to hate. In one incident, the striker flicked his boot back into the right knee of Robertson as they ran along together. Robertson needed treatment and was substituted at halftime.

The player who came on for Robertson - Wijnaldum - made an almost instant impact, making it 2-0 by sweeping home a low cross from Alexander-Arnold.

Two minutes later, he made another run into the area and met a cross from Xherdan Shaqiri with a firm header into the corner past a flat-footed Ter Stegen.

It was bedlam inside Anfield, the scene of so many of these famous fightbacks.

Philippe Coutinho, a former Liverpool player like Suarez, was substituted for Nelson Semedo after an ineffective game - his tracking back left a lot to be desired - and Barca's game quickly improved, the team exerting more control. Liverpool's players might also have wondered how to approach the game with the score tied on aggregate.

Then came the coup de grace after cheeky play by Alexander-Arnold. Origi scored and Barcelona had no answer.