The world and Olympic rowing champion Hamish Bond has been beaten in the men's pair at the national rowing championships for the first time in eight years.

Bond and his partner James Lassche were beaten by James Hunter and Tom Murray by just over a second in the final.

Murray and Hunter served up the highlight of the penultimate day of the 2016 championships with their thrilling defeat of Bond and Lassche in the men's premier pair final. 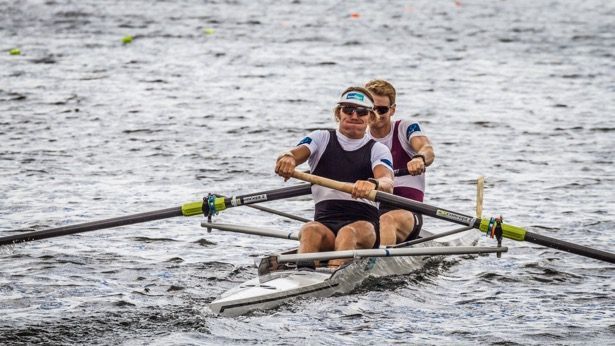 The outsiders started aggressively and quickly established control of the race, and while Bond - chasing a ninth successive gold medal in this event - and Lassche (both of Southern) predictably responded, but Murray and Hunter of Central RPC bravely held on to claim a memorable win by 1.04 seconds and reverse the finishing positions from 12 months ago.

"I always wanted to win a Red Coat and to do so in the pair and to dominate from the start is just amazing," says Murray. "It is great for the confidence heading into the trials. We've had a really good feeling in the boat when we've raced together, the expectation was to be competitive but to come away with the win is amazing."

Hunter said they were very happy. "It is no secret we have wanted this one for a while."

A further seven premier and lightweight finals will highlight the concluding day of finals action at the 2016 championships on Saturday.

Among one of the most eagerly anticipated events will be the final of the premier men's single sculls with Olympic champion Mahe Drysdale pursuing a ninth national title in the event. He will face strong opposition led for the fastest qualifier for the final, John Storey, who has already banked one gold medal here this week as a member of the triumphant Southern RPC crew in the men's premier quadruple sculls.

The final of the women's single sculls will also make for compelling viewing as 2014 world champion Emma Twigg attempts to regain the title she owned for a six-year spell from 2009 to 2014. Defending champion Lucy Spoors (Southern) and Sarah Gray (Waikato) and Eve Macfarlane (Southern) will be among her chief opposition.

Other finals to relish include the men's and women's premier eight.