New Zealand have bowled Australia out for 224 on day two of the third Cricket Test at Adelaide. 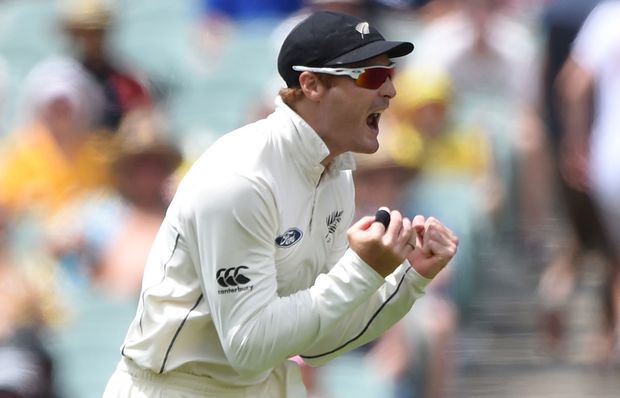 The home side were all out towards the end of the evening session and sent the visitors' batsmen out to face six overs before dinner.

The Black Caps' openers survived with Martin Guptill and Tom Latham both scoring ten as the New Zealand reached 22 without loss.

At dinner on day two the scores were level following the visitor's meagre first innings effort of 202.

The home side started the evening session in trouble on 116 for 8, but the Australian tail wagged impressively.

The wicket keeper Phil Nevil top scored with 66 and was part of a 74 run stand with Nathan Lyon (34) for the ninth wicket.

When Lyon was caught by Kane Williamson off Trent Boult, Australia were 12 runs in arrears bringing the injured Mitchell Starc out to bat.

Starc may not be able to bowl on his bad ankle but he can still swing a bat, clobbering 24 runs including two sixes before Nevill was caught by Santner off Bracewell to end the innings. 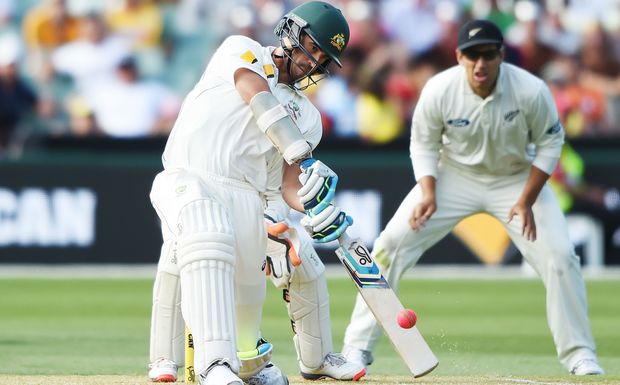 Having lost their opening batsman under lights on day one, Australia resumed their first innings on Saturday at 54 for 2.

They added only nine runs before Adam Voges was caught in the slips for 13 off the bowling Tim Southee.

Shaun Marsh was the next to fall, run-out for two by Brendon McCullum before his brother, Mitchell Marsh, was caught behind for three off Doug Bracewell.

steadied the ship briefly as Smith brought up his half century. 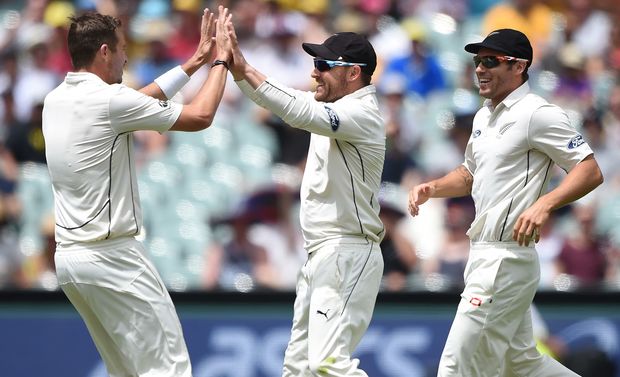 But Smith's resistance soon crumbled for 53 as the off spinner Mark Craig found his inside edge and BJ Watling's gloves.

The new batsman Peter Siddle came and went for a four ball duck, caught at silly point by Tom Latham off Craig, before Josh Hazlewood was clean bowled by Mitchell Santner for four.