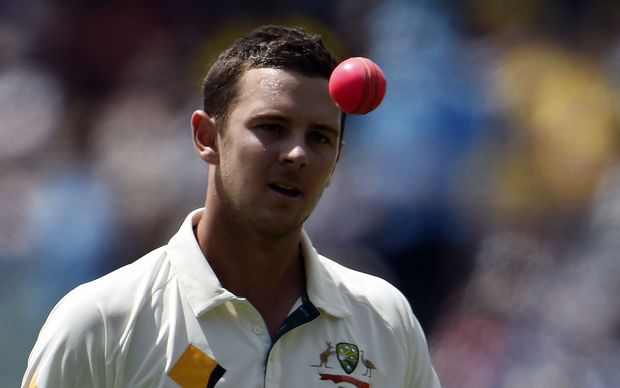 Australia's paceman Josh Hazlewood tosses a pink ball as he gets ready to bowl. Photo: AFP

The eyes play tricks on you. To me, sitting as a spectator at the Adelaide Oval yesterday, the pink ball looked bigger than the red ball traditionally used in test cricket.

It wasn't, of course, it was exactly the same size. But as a spectator, the bright fluorescent pink ball was so easy to see that it seemed larger.

Is that enough to make the experiment with a pink ball in this test a success? I think so.

The New Zealand top order batting failed, but I think it was not because the ball was difficult to pick up. The New Zealand batsmen will have some explaining to do about their performance here, but I'll be surprised if they blame the pink ball.

It's said, possibly apocryphally, that Groucho Marx once watched the first hour of a cricket test match and then turned to his companion to ask "when do they start?"

Cricket has tried to innovate over the years with limited overs and 20-20 games, but test cricket has stayed much the same, wearing its dullness and slowness almost as a badge of pride. Until yesterday.

Test cricket played with something other than a red ball? A test match under floodlights? It would be wrong to say such thoughts have been unthinkable, because people have been thinking about them for decades. 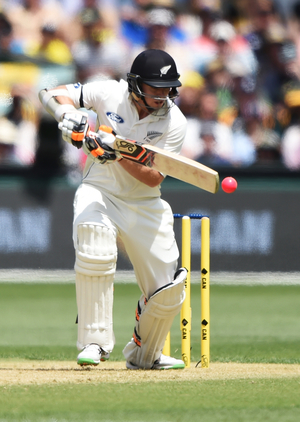 Eyes on the ball: Tom Latham is attentive on his way to a half century on Friday. Photo: PHOTOSPORT

The first official limited overs international under lights was played as long ago as 27 November 1979. It took only 36 years for someone to decide it was worth trying it in a test.

Certainly Adelaide is enjoying hosting the first day/night test. A record first day crowd of 47 000 attended yesterday and bigger crowds are expected at the weekend. It will be great for the TV broadcaster too, Channel 9, too.

The test in Perth, because of the time zone difference, played in prime time in the eastern states of Australia, and rated its socks off, despite being a dull-ish game.

There was a real buzz at the ground all day. I conducted my own unscientific poll, asking 20 people about the pink ball innovation and did not find anyone who thought it a bad idea.

People just seemed excited by the idea that test cricket might at last be adapting and trying to find ways to make the experience of the spectator better.

There is already talk of other experiments. A test match World Cup has been discussed for years. Four day tests are on the agenda with the influential former Australian captain and TV commentator Mark Taylor a strong supporter.

A small thing I would like to see is for the players to have their names printed on the back of their shirts. Even at a ground as good as the Adelaide Oval, where you do feel close to the action, it's difficult to identify the players, all dressed identically as they are. The spectators should be able to tell the players apart.

The Australians play tests against the West Indies at the Melbourne Cricket Ground and the Sydney Cricket Ground after Christmas. Why not play them with a pink ball and under lights too?

No doubt authorities will say a month just isn't enough time to get everyone to agree, but cricket administrators need to move ahead quickly now they know a pink ball works.