The New Zealand cricketers have plenty of work ahead on day two of the inaugural day-night test against Australia in Adelaide if they're to have chance of levelling the three test series. 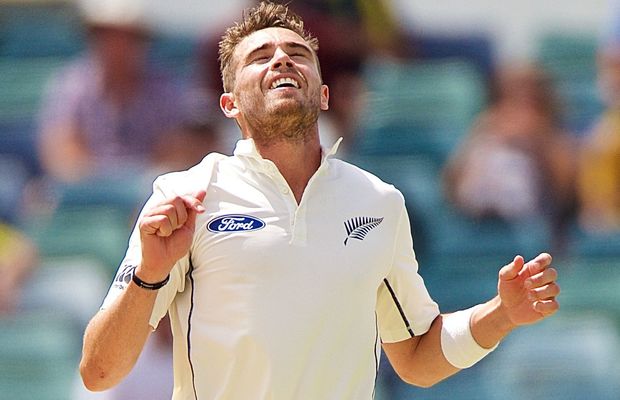 Australia enjoyed the better of the first day of the pink ball test despite Black Caps captain Brendon McCullum winning his first toss of the season and opting to bat.

New Zealand could muster only 202 as the Australian bowlers shone with opener Tom Latham top scoring with 50.

The New Zealand seamers swung the ball in the last session under lights to remove the Australia openers cheaply, with the hosts finishing in 54 for 2 at stumps.

Batsmen had spoken of the pink ball with trepidation in the leadup to the historic match and 12 wickets tumbled in front of a festive crowd of 47,441.

After winning the toss, New Zealand squandered a positive start with poor shot selection to be dismissed cheaply early in the twilight of the late session of the third and final test.

But captain Steve Smith (24 not out) and Adam Voges (nine) dug in to guide the hosts to 54-2 at stumps under an inky black sky.

Australia, 1-0 up in the series, took the lead in nudging a 138-year-old format into prime-time hours so it was fitting that the home side held a slender advantage at the close.

Their satisfaction was tempered, however, with an injury to pace spearhead Mitchell Starc who limped off late in the middle session and never returned.

Scans confirmed he had suffered a stress fracture in his right foot and he will bowl no further in the test.

"It's very disappointing for him. He's been on fire," Siddle, who took 2-54 and celebrated his 200th test wicket, told reporters.

"I think we've got enough bowling in our lineup anyway to take the 10 more wickets needed so I think we'll be fine."

Starc, who has carried an ankle injury for months, was the pick of Australia's bowlers with 3-24, but was in clear discomfort from the first ball.

He trapped the dangerous Kane Williamson in front for 22 with a searing yorker just before the first interval and New Zealand duly crumbled after the break.

They lost three wickets for four runs in 11 balls, with opener Tom Latham, Ross Taylor and McCullum all falling through loose shots.

Spinner Nathan Lyon triggered the rout by having Latham caught behind for 50, and Taylor holed out for 21 edging Siddle through to wicketkeeper Peter Nevill.

McCullum showed no interest in a patient captain's knock and was caught behind for four slashing wildly at Starc.

Spin-bowling all-rounder Mitchell Santner, a surprise selection in place of seamer Matt Henry, showed some resilience but Starc returned to bowl him for 31 before exiting the field.

Josh Hazlewood will go down as the day-night test's first wicket-taker, trapping opener Martin Guptill lbw for one.

Though the game's oldest format took a leap into the future, players and spectators also looked back in sorrow on the one-year anniversary of Phillip Hughes' death.

Both teams wore black armbands and a short video tribute played during the tea-break in remembrance of the former Australia batsman who died at the age of 25 after being struck in the head by a ball during a domestic match.