Any possibility of Steve Hansen becoming a future England head coach has ended with the mastermind of New Zealand's 2015 World Cup triumph declaring the All Blacks will be his final post.

Hansen's contract expires after the visit of the British and Irish Lions and Rugby Championship in 2017 and having seen New Zealand become the first team to defend the title with a 34-17 victory over Australia he expects his stewardship to conclude in two years' time. 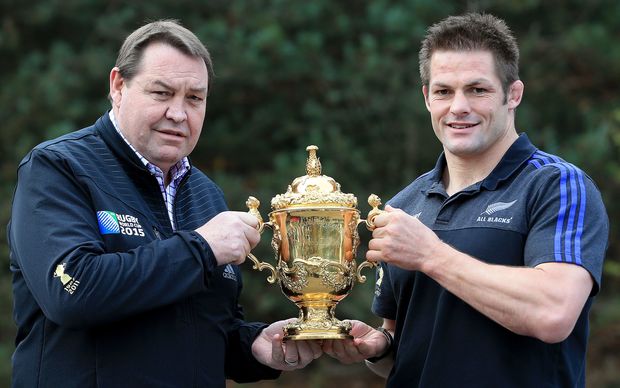 England are conducting a review into their World Cup disaster which is expected to end with the departure of Stuart Lancaster and his coaching team.

Hansen's name would appear at the top of any list of potential replacements but the 56-year-old is determined to ensure New Zealand's dominance of the game continues.

When asked if he would ever accept a position with another nation, Hansen said: "No, not after coaching the All Blacks.

"It's okay to coach another country but now I've coached the All Blacks I couldn't coach against them. I couldn't do it.

"If you wanted to put yourself in that situation, then just stay where you are. This is the best team for me to coach because I'm a New Zealander and I don't need to go anywhere else."

Hansen views maintaining the All Blacks' dominance of the game, they have lost only three matches since lifting the Webb Ellis Cup in 2011, would ask more questions than taking over a under-performing nation such as England.

"My argument to that would be that it is a bigger challenge to turn a champion team into a better team," Hansen said.

"I don't want to sound like a big head there but the All Blacks have been a good team for a long time, so when I came I wanted to make them better.

"People will have their own opinions but that's what we're trying to do. In the next two years we want to make it a better team than it is now. And that's just as big a challenge as coaching anywhere else."

For the final two years of his stewardship, Hansen has targeted the twin aims of re-establishing New Zealand next year amid the expected retirement of Richie McCaw, Dan Carter, Ma'a Nonu, Keven Mealamu and Conrad Smith and preparing for the visit of the Lions, which he describes as an "amazing series in its own right".

"We know we're losing five guys with over 100 Test caps. We're in pretty shape to replace most of them, but it's really pulling our game apart and saying 'what can we improve'.

"If we allow ourselves the luxury of saying it's okay to take a step back then that's what is going to happen.

"But if we're strong enough in our beliefs we'll say 'no, just because those guys are leaving doesn't give us the right to step back, we've got to continue at that level, if not improve'.

Hansen's outlook on his future beyond 2017 hinges only on the health of the All Blacks.

"I'd love to coach the All Blacks until the day I die, it's the best job in the world as far as I'm concerned for a rugby coach. But is that right for the team?

"I'd like to think that while I might be offered a contract until 2019, I wouldn't take it if I didn't think it was right.