OPINION: Sunday was a special day. Yes, the All Blacks became the first back-to-back Rugby World Cup champions. Yes, some All Black greats bowed out from Test rugby in the ultimate way.

But this day should also be marked down as the day Dan Carter decided to drop the whole 'boy next door' act and just be a flat out beast. 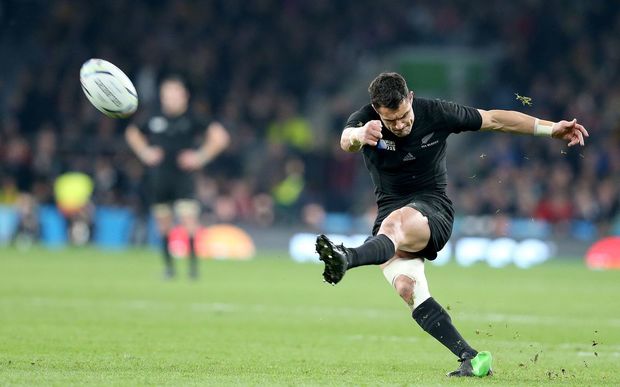 Dan Carter - in arguably the match of his career - kicks a conversion during today's Rugby World Cup final. Photo: PHOTOSPORT

Forty-two metre drop goal. Ruthless celebration during its flightpath. Convert the last try with his right foot. Do a changing room dance.

It's a shame he's leaving to go play with French club Racing 92 - I'm digging DC's sweet new attitude. But this was the sweetest way he could have gone out: a 'man of the match' performance in his first final appearance in four World Cup campaigns.

More on today's victory for the All Blacks

Written off by many before the season even started (notably including a seasoned hack for one major daily), Carter punted, ran, passed and drop-kicked all doubts over his ability.

I'm not sure when the All Blacks last managed 'droppies' in successive Tests but the two that Carter slotted in the semi-final and final must rank as the most important in the team's history. This morning's effort, a snapshot from front-foot ball, pushed the lead to seven points with 10 minutes to go.

That broke the backs of the Wallabies, a side that had returned, roaring, into a game that - up until then - they had no right to be in.

Ben Smith's sin-binning, however, was a crucial moment. The All Blacks leaked 14 points while he served his sentence for tip-tacking Drew Mitchell.

It was a rude awakening. Up until then, the All Blacks' four previous yellow cards in the tournament had only led to them conceding one try. If they still do court sessions after the game, then it's doubtful Smith will be making it out of the changing room unassisted.

That sin-binning turned a game that looked like it was going to be one-way traffic into something just a little bit too close for comfort for All Black fans.

Tevita Kuridrani's excellent finish - bringing the Wallabies back to within four points - was a further cue to cease premature celebrations in pubs and living rooms around the country.

However, the Wallabies were playing catch-up. This was the key to the match, and they were put in that position by two stunning All Black tries.

The first was a simple 'catch and flop' over the line by Nehe Milner-Skudder, but it was built on 80 metres of brilliance. Forwards and backs combined to fuel a ruthless assault on Wallaby territory, with short passes exploiting gaps in close to the ruck area.

Just after the second half began, which is test rugby's golden period, it only took two players to provide the spark. Sonny Bill Williams chimed in with two beautiful offloads, with the second to Ma'a Nonu - who spotted the smallest of holes in the Wallaby line, busted his way through and set sail for the line to score.

Since they were already facing the largest halftime deficit in Word Cup final history, this was always going to be a tall order for the Wallabies. To their credit, they not only took made sure Smith's sinbinning took its full toll but they owned the periods on either side of it, too.

However, it was the All Blacks' precision in the final 10 minutes that killed them off.

Bookended by Carter's drop goal and Beauden Barrett's opportunist hack through, the forwards simply took the ball into contact and waited - before repeating the process and killing the clock. Every second that ticked by made every All Black fan's smile grow a little wider.

It was all just a matter of time before Richie got his hands on the cup, the fireworks went off and John Key got to creep around the All Black changing room desperately trying to make eye contact.

We say goodbye to Ma'a, Conrad, Tony, Keven and Dan. But Richie? He almost seemed surprised when he was asked about retirement after full-time. Maybe it's not the final whistle just yet, after all…