All Blacks coach Steve Hansen doesn't expect to be leading his champion team through to the next Rugby World Cup.

Hansen who directed the team to its 34-17 record-breaking victory over Australia in the final at Twickenham is currently contracted through to 2017. 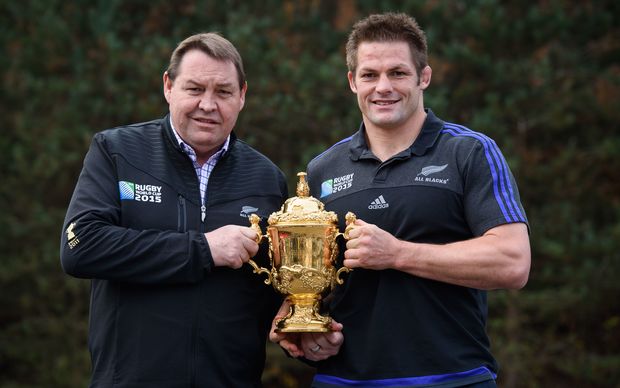 From being assistant coach when the All Blacks won in 2011, Hansen has enhanced his reputation since taking over as head coach four years ago.

Under his guidance they have won 49 of 54 games and the win over Australia made the All Blacks the first side to defend the world crown and the first to win it three times.

But Hansen said the time was fast approaching for someone else to take over the prestigious coaching role.

"There's a reason why it only goes to '17, because I'm not sure about that," he said of his contract.

"I wouldn't say no but I'm certainly not saying yes either.

"I like the idea of changing the guard halfway through a four-year cycle which has the World Cup in the middle of it.

"When people come in it's easy to get some real dramatic shift early and it's a lot harder to keep that momentum going.

"I'd probably say it's more likely I won't be there after '17, than being there."

The British and Irish Lions tour New Zealand in 2017.

New Zealand partied hard on Sunday after the three tries to two victory in England.

But with his four year goal achieved, Hansen said he had a few drinks and then went to bed.

On reflection the following day the the 56-year-old former policeman talked about the strains of the job and why it could be good for the team to have an injection of fresh ideas.

"Also for a long time we've put everything on the World Cup as centre and unless you've got some real strength of character you can be tricked into making decisions that are right for your survival rather than what is right for the team," he said, having been with the All Blacks as either assistant or head coach for 12 years.

The All Blacks look set to lose over 700 caps of international experience if captain Richie McCaw joins the exodus from the team after yesterday's victory.

Dan Carter, Ma'a Nonu and Conrad Smith are all heading for French teams to play out the end of their careers.

Hooker Keven Mealamu is heading into retirement, while prop Tony Woodcock's long front row career has been ended by injury.

The All Blacks will also lose Jeremy Thrush, Ben Franks and Charles Piutau to British teams, while Sonny Bill Williams, and Liam Messam have committed to play for the New Zealand Sevens squad.