Captain Richie McCaw is the greatest All Black of all time, with first-five Dan Carter a close second, coach Steve Hansen said after his team's 34-17 World Cup final win over old rivals Australia. 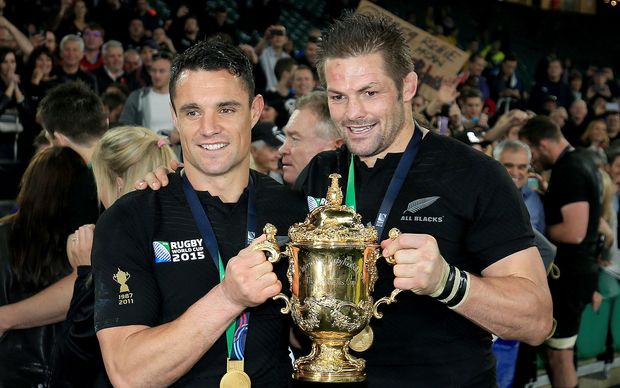 McCaw, 34, lifted the Webb Ellis Cup for a second time and will now decide whether to prolong his illustrious international career. Carter, 33, made his 112th and last All Blacks appearance a triumphant one having missed the 2011 final through injury.

"I think he (McCaw) is the greatest All Black we have ever had... and Dan is a close second," Hansen said.

"The only thing that probably separates them is that one is a flanker and you shouldn't play 148 Test matches as a flanker. That is unheard of. You put your body on the line every time you play there."

McCaw, the most-capped international rugby player in history, got off to an inauspicious start in the tournament, booed by the crowd after receiving a yellow card in their opening match against Argentina.

But Hansen thinks his team have won round their critics.

"There are a lot of people have realised that we are not the big, bad ogres that sometimes we are perceived to be.

"We are actually just ordinary people who can play rugby reasonably well."

Carter calmly slotted a long-range drop goal and penalty late in the second half on his way to claiming a man of the match award. Hansen hopes the next generation of players will be able to emulate the successes of the pair.

"We are very fortunate to have players like that, and the opportunity will come for someone else now to try to be better than him (McCaw), and be better than Dan.

"The pleasing thing is we have got a massive group of players that have played between 20 to 40 tests, and are in great shape to take this team forward when these other guys decide to move on. There are a few of them moving on today, and you couldn't have got a better finale."

Hansen's praise for his captain was reciprocated by McCaw.

"Steve has led the way in terms of the attitude of what this team is aspiring to do. In 2012 after the last World Cup it would have been easy to roll into that year and live off what we had done previous, but the standard was set straight back up high again...and that has been the attitude right the way through.

"The relentless desire to be better and keep improving and add to the legacy of the All Blacks is led from Steve."