The All Blacks have cemented their status as the greatest team in rugby history, overwhelming Australia 34-17 at Twickenham to become world champions for a record third time, and the first nation to retain the Webb Ellis Cup.

Tries from Nehe Milner-Skudder and Ma'a Nonu had the All Blacks cruising 21-3 early in the second half before Ben Smith's yellow card opened the door for Australia, who got back within four points with tries by David Pocock and Tuvita Kuridrani.

But Dan Carter, who missed most of the 2011 tournament through injury and who is retiring from international rugby after match, stepped up with an exquisite drop goal and a 50-metre penalty to put the result beyond doubt. 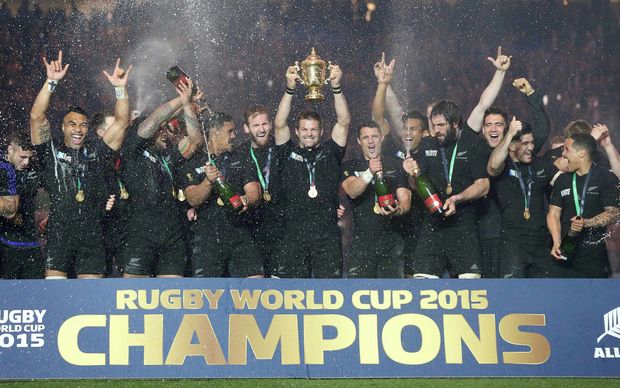 Replacement wing Beauden Barrett applied the black icing to the Kiwi World Cup cake with a late try which Carter converted to take his personal tally to 19 points.

See how the action unfolded with RNZ's live blog here

New Zealand have lost just three times in 54 matches since their triumph on home soil four years ago, and have won every World Cup match since losing to France in the 2007 quarter-finals.

"I'm pretty grateful to be where I am considering what happened four years ago," said Carter, who was also part of the unsuccessful 2003 and 2007 campaigns.

"I'm so proud of the team. To win back-to-back World Cups is a dream come true. It's a pretty strong group of guys. We try to do things no other team has done before... it's a special feeling to be part of such a great team." 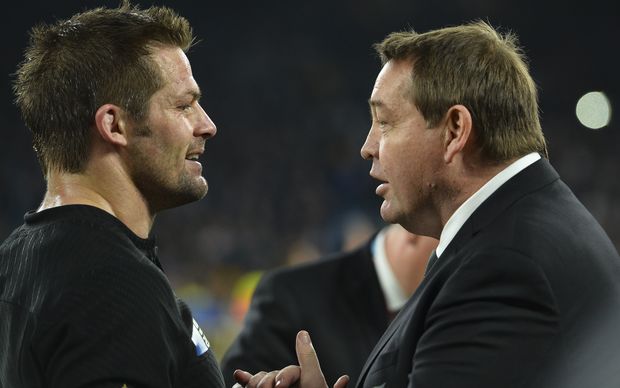 New Zealand looked on their game from the start, zipping the ball sharply along the lines and creating quick ball at every ruck to keep the Wallabies on the back foot.

Their pressure enabled Carter to thump over three penalties to one from Bernard Foley to make it 9-3 after half an hour. But it was a controversial lead.

Referee Nigel Owens missed a clear forward pass by Milner-Skudder moments before penalising the Wallabies, and though 80,000 fans inside Twickenham and millions around the world could see it on replays, the strict TMO protocols prevented the officials from checking the incident - although they could have done had it led to a try instead of a penalty.

Australia suffered another blow when they lost centre Matt Giteau to a head injury and their first-half misery was completed when Conrad Smith, Aaron Smith and Richie McCaw fired the ball wide for Milner-Skudder to score in the corner.

Carter converted for a 16-3 half-time lead and it took only two minutes of the second half for New Zealand to effectively put the game to bed.

Sonny Bill Williams, on for Conrad Smith, delivered a trademark offload to Nonu and his fellow midfielder tore through some soft defending and sprinted 30 metres to mark his 103rd and last New Zealand appearance with a killer try.

Australia, as always, refused to lie down though and immediately roared back into the attack. Smith was sin-binned for a tip-tackle on Drew Mitchell - the first yellow card in a final - and from the resulting penalty Australia drove over the line with Pocock the man at the bottom.

Foley converted to make it 21-10 with 28 minutes remaining. That spurred Australia into greater efforts and they got their second try after 63 minutes when a probing kick by Will Genia bounced perfectly for Foley who fed Kuridrani to slide over and with Foley slotting the conversion they were back within four points.

The atmosphere at Twickenham revved, but once again it was the cool head of Carter who regained control. 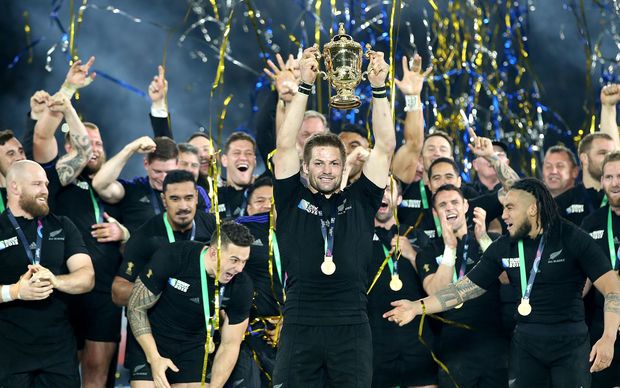 The first-five, whose dropped goal in the semi-final against South Africa set in motion a momentum shift that turned that match, slotted another despite being under huge pressure.

Carter then applied the coup de grace with a 50-metre penalty to make it 27-17 with five minutes remaining.

Australia attacked again but great defence kept them out and Ben Smith then kicked into space for the fresh-legged replacement winger Barrett to collect the ball and score under the posts.

The New Zealand bench erupted, celebrating their third triumph after 1987 and 2011, and their first on foreign soil.

"It's a great way to finish," said coach Steve Hansen of Carter's orchestration of the win. "You couldn't script it any better."