Sam Cane will become the 67th All Blacks captain when he leads the side in their Rugby World Cup pool match against Namibia at the Olympic Stadium in London on Friday morning. 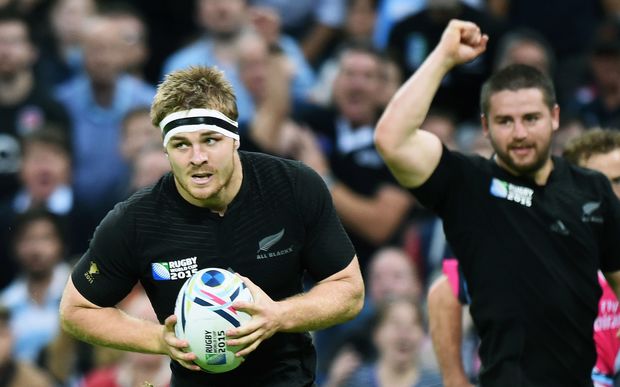 The 23-year-old, who has spent much of his All Blacks career coming off the bench behind full-time skipper Richie McCaw, gets the opportunity to lead a young All Blacks side, with many of the senior squad members getting a rest after Monday's win over Argentina.

"It's a great honour and it took me by surprise a little bit," Cane told reporters after the announcement.

"With the short turnaround I was thinking it would just be great to get a start and [coach Steve Hansen] said you'll be starting and you'll also be captain, so it took me back a little bit."

With the heir apparent to McCaw, Kieran Read, also getting a rest, Steve Hansen said it was a fairly straightforward decision to give Cane the opportunity in his 26th Test.

"You go through the process of who could captain the team, then the next thing you say to yourself is is that the right decision for the team for the future," he said.

"Obviously if you look at the immediate future, Ricko [McCaw] will come back and be the leader but then after you've got Kieran Read who's likely to the next full-time guy and then after that you're saying who's going to drop in after that.

"Could have easily gone with someone like Liam [Messam] for example, who's got a lot of mana in the team, but he's not going to be here next year so it's just a great opportunity to future-proof and give someone an opportunity who we have a lot of faith in."

Only three players from the match at Wembley have kept their starting spot, with Nehe Milner Skudder and Julian Savea on the wings, while Sam Whitelock backs up after playing 80 minutes at lock on Monday.

Beauden Barrett gets his first start of the season, replacing Dan Carter at first five-eighth, with Colin Slade also getting a start at fullback.

In the forwards, Victor Vito and Liam Messam get an opportunity to start at number eight and blindside flanker, with Cane completing the loose forward trio.

Luke Romano starts alongside Whitelock after sitting out against Argentina with Ben Franks and Charlie Faumuina the starting props while Codie Taylor gets his first test start at hooker.

There's plenty experience on the bench with 660 caps, compared to the 401 caps in the entire starting fifteen.

Regular first-string players McCaw, Read, Tony Woodcock, Ma'a Nonu and Ben Smith will all ride the pine and may be injected in the second half.

It will be the first time New Zealand has met Namibia in a test match.